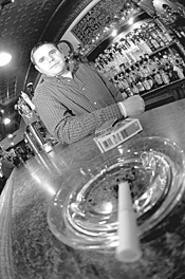 Mayor Tom George sounds weary. He presides over a congested suburb where nearly every structure, street, and sewer is 100 years old. Its few factories are either dead or walking with a limp. Its retail is slim and struggling. Aside from thrift stores, it has but one thriving industry: bars.

And now the Lakewood City Council is considering killing them.

This month, a commission will recommend whether or not to enact a smoking ban. In a daintier locale, this might not be cause for uproar. Everyone could rally around, knowing they were saving heathens from their carcinogens.

Unfortunately, this is Lakewood. Within its compact five square miles are 150 liquor licenses. "Lakewood has a bar and a church on every corner," says John Grandzier, owner of Merry Arts Pub.

These aren't ornate joints. You lease a storefront, throw some shamrocks on the wall, and serve up Jäger bombs and $1 drafts. But the lack of aesthetics veils a mercantile guile. Drive down Detroit or Madison on any night, and you'll think you're in a college town. While the rest of Northeast Ohio bemoans her brain drain, Lakewood pours another shot and toasts its good fortune.

"Lakewood is a regional attraction for a lot of young folks because of the bars," says George. "I have nephews who come in from Mentor and Lake County because of the nightlife."

This, however, is not the kind of commerce understood by the well-meaning do-gooder class. They know not the steadfast marriage of bars and cigs. Their presumption: If they ban smoking, the young, the drunk, and the boisterous will simply keep spending -- only without the companionship of tasty American tobacco products.

And this, of course, would be wrong. For today's lesson, let's go to our more educated brethren in Toledo.

That city enacted a ban in 2003. Within a year, roughly 20 bars closed. Business bottomed so hard that when they auctioned off liquor licenses -- the gold standard of the street-level economy -- no one showed up to bid.

Arnie Elzey owns a sizable sports bar, the kind with theater seating and NFL Ticket. His place used to be packed. Then came the ban.

His sales plummeted by 40 percent; his employee ranks fell with it. Twelve workers qualified for unemployment. Another 10 quit because they couldn't get the shifts. He started closing for lunch, and his happy hour died. "People would come in for one drink and then leave," he says. "People go outside to smoke and they don't come back."

Meanwhile, 10 minutes away in Michigan, where cigs and bars had yet to divorce, business boomed. The most crushing evidence came on Super Bowl Sunday last year. Elzey's place, which once flourished on any game day, was at just two-thirds capacity. In Michigan, however, people waited in lines to get in the door. "Seventy percent of the cars in the parking lot were from Ohio," he says.

Most neighborhood joints ignored the law. "They'd have someone watching the door," says Elzey, as if they'd been transplanted to the days of Prohibition. So police, much to their chagrin, were dispatched to bust people for Illegal Use of Ashtray. In terms of burning public resources, it was akin to sending out squads on jaywalking stings. "The cops don't want to do it because it's stupid," says Elzey. "They sit there and they shake their heads."

Give Toledo credit. It took only a year for it to reach that inevitable "Oh, shit!" moment. Last fall, voters repealed much of the ban.

Of course, they could have saved themselves the trouble by consulting the experts. That would be bar owners and their patrons. "We know our business, we know our customers, and we know what they want," says Grandzier. "I'm terrified that it's gonna wipe us out."

But those behind Lakewood's push seem to know none of this. Be it the teetotalers who pushed Prohibition, the fundamentalists who crack on strip joints, or the rednecks who restrict gay marriage, it's usually those who understand things least who assert their power.

In Lakewood's case, that would be Ryan Demro, a smart, intense young councilman and the city's lone Republican. His rationale is simple: "We believe that everyone has the right to clean air."

But Demro is also someone who should have the word "ambitious" tattooed to his forehead. He's a suit guy, not a bar guy. Many worry that he's merely trying to score 15-second TV interviews, regardless of the damage caused.

"I don't think he understands economic development in the least," says George.

The mayor, by contrast, is a scholar in bar theory. He did his graduate work driving a beer truck for Teamsters Local 293. "When you're 24 and single," he lovingly recalls, "I can't imagine a better job in the world."

George might support a ban if it were statewide and he didn't have to watch his constituents cross into Cleveland, Rocky River, and Fairview Park just to get a beer. But when you're a first-ring mayor with much to do and little to do it with, you can't afford to slay your No. 1 industry. One year after Tempe, Arizona, enacted its ban, tax revenue from bars had fallen 31 percent. In Lakewood, that's called suicide.