These grizzled garage vets live for the stage and nothing else. 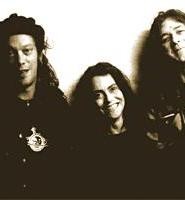 "One-in-a-million will be the Stones," writes Dead Moon patriarch Fred Cole from his Clackamas home just outside Portland, Oregon. "I thought if I could just be one-in-10,000 and stay alive playing originals, that would be plenty."

Cole is e-mailing, because he's "so deaf that the phone is a nightmare." It's a by-product of a career in music that has stretched as far back as that of the Rolling Stones.

True, Cole never fell out of a palm tree at an exclusive Fiji resort, but he's pushed through as many dimly lit dives and backwoods bars as almost any rocker his age. For 20 years Cole has led Dead Moon, the country-fried garage-rawk trio he formed with wife Toody and drummer Andrew Loomis in 1987, but the story goes back a lot further.

"I wanted to play in a band since I was nine years old and saw a bunch of guys in red cowboy shirts playing on a flatbed truck in the parking lot of a Safeway where my mom was a checker," says Cole. "Man, that was it. After that, it was trying to make enough to stay alive."

Cole began mining his musical gold in the mid-'60s, during the early days of garage and psych rock, when bands across the country forged rollicking regional hits. (Many are anthologized on the popular Nuggets collections that appeared a couple of decades later.) After a failed launch into deep soul as a bassist and vocalist, Cole joined a post-British Invasion band called the Weeds.

It was 1966, a time of crazed hormone-fueled rockers. It was a time when a band from Las Vegas (as the Weeds were) would drive up to San Francisco to open for the Yardbirds, see that fall through, and then keep heading north for Canada to avoid the draft. However, for one Weed, this abortive escape plan ended not in a draft card but a marriage license. Cole's always been about partnership, whether with Toody or rock and roll, and lifers down on their luck dominate Cole's songs.

Running out of gas in Portland, the Weeds would meet 1) a girl named Toody Conner, who in no time flat became Toody Cole and later, Dead Moon's bassist, and 2) a manager who changed the band's name to Lollipop Shoppe. Los Angeles' the Seeds were already making a name with blues-tinged psychedelic rave-ups such as "Pushin' Too Hard," so Lollipop Shoppe it was until the group called it quits in '69. (The Seeds and Lollipop Shoppe would eventually "share the stage" when the Seeds' "Can't Seem to Make You Mine" and the Lollipop Shoppe's "You Must Be a Witch" both appeared on the Nuggets boxed set.)

The '70s proved to be a period of almost constant flux. The Coles spent some time in the Yukon, still avoiding the Vietnam draft, and it was -- like all of Cole's endeavors -- a self-built and educational existence. "Once you find you can survive on very little, it gets easier to stay clear of the pitfalls life throws your way," says Cole, pretty much describing Dead Moon's aesthetic.

Back in the U.S., the Coles tested the waters of L.A., but ended up back in Portland to found a homestead and start a musical-instrument shop. (To this day, they own and operate Tombstone Music and General Store, a "frontier mini-mall" where you can pick up your Dead Moon lighters, cigarettes, and beer). Cole transitioned through several lo-fi bands -- including the Rats, where Toody debuted on bass -- before meeting bartender and now Dead Moon drummer Andrew Loomis. What the Wailers and the Sonics, with their ragged soul-screams, were to Tacoma, Dead Moon would be to Portland.

From Texas transplant Roky Erickson to "the dregs of the time" in L.A. after the Beach Boys, the West Coast attracted "all the gunslingers of early rock," Cole recalls. Reaching further out, however, Cole's roots connect back to the Mississippi Delta and the spirits of Howlin' Wolf, John Lee Hooker, Elvis, and Jerry Lee Lewis. Add Johnny Cash, the Dead Boys, and AC/DC, and you'll begin to understand how the cowpunk Dead Moon was born -- still kicking and screaming in a constricted, overdriven, effects-free yowl, channeling Old West voodoo vibes with a whiskey chaser.

Cole (who admits he's perpetually a little pissed off) wanted to form a band to play music imbued with hope and despair -- a bruised-rebel reality. Almost naming it "Red Moon," Cole finally settled on the symmetrical Dead Moon and cut the band's first 7" on a mono lathe that was a birthday gift from Toody. This 1954 Presto-88 "Cadillac of disc cutters" turned out to be the same lathe used to cut the Kingsmen classic "Louie Louie" (the garage-rock/Nuggets connections come full circle), and it has produced all of Dead Moon's homespun vinyl.

Since forming, Dead Moon has toured nonstop with the same no-frills, no-big-label, no-bus-and-no-roadies, "we're-just-a-band" attitude. In Europe especially, the Coles' weathered harmonies (they're now grandparents in their late 50s) and Loomis' undistracted drums -- rhythmic and dramatic -- have propelled them from underdogs to headliners.

Their longevity has allowed them to play memorable U.S. tours with Mudhoney, the Nomads, Babes in Toyland, Fugazi, the Cramps, and Rocket From the Crypt, to name but a few, their most high-profile admirer may be Pearl Jam, which covered Dead Moon's "It's O.K." Indeed, Dead Moon has a rabid enough fan base; it's not inconceivable that someone out there has copied Cole's Dead Moon tattoo, which occupies much of the right side of his face. If that's too much of a commitment, Cole and Sub Pop are preparing a September boxed-set anthology called Echoes of the Past, showcasing their grizzled, road-tested riffs in a stereogram of tape hiss.

Dead Moon's essence, however, is best conveyed onstage, with the trio kicking out 40 years of rock-and-roll possession séance-style, around a single candle topping an upturned Jack Daniels' bottle on the kick drum.