Stars Fell finds mirth in mysteries of death and loss. 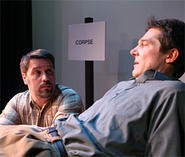 Death is one of the most challenging subjects for a playwright -- or anyone else -- to handle, which is why we are often left to fall back on the opposing force of humor to deal with it. As Woody Allen once said, "It is impossible to experience one's own death objectively and still carry a tune."

In local writer Mike Geither's play Stars Fell All Night, being premiered by Cleveland Public Theatre, humor is mixed with word games, dream sequences, and cadaver puppets to shape a tantalizing evening. Even though Geither seems, at times, to be a bit too much in the thrall of his own wide-ranging wit, he manages to keep the sometimes convoluted proceedings on course.

Theo is a middle-aged mortician whose sister Carol died 16 years ago, and he's never gotten over it. To be more specific, he's thoroughly swallowed up by her absence. Anyone who has ever lost someone close -- and that pretty much means everyone -- knows that feeling of bottomless loss and abandonment. But Theo is suspended in the third stage of grief, and his bargaining takes a twisted form as he dons a dress and wig so he can play-act imagined scenes from her life with the corpses in his care. (Relax -- the corpses are invisible; this ain't Weekend at Bernie's 3.)

Back at home, Theo is raising his teenage niece Maria, playing charades with her that involve wildly intricate gyrations to capture oblique thoughts such as "weather" and "migration." The games continue at the funeral home, with Theo and his co-worker Kirk indulging in a back-and-forth rhyming and free-association gambit as they prepare their charges for eternity.

These little frolics, amusing as they are, serve a larger purpose, as they represent the attempts we all make to connect with others through subtle interrogation: Can you guess who I am? Can you figure out what I mean? In a meditation on death and loss, these queries are paramount, and they fashion a resonant sounding board for the exploration that's set in motion.

Constructed in short scenes, the play also introduces Maria's boyfriend Edmund, along with Kirk and Theo's girlfriends. But the focus is placed relentlessly on Theo and his tortured existence without Carol. As he notes, he's been grieving for so long, "It's not a process anymore; it's a way of life."

Playwright Geither plants a few surprises -- deadly and otherwise -- along the way, but it's all done with such a light touch (belying the black and mostly bare stage on which the cast operates) that the audience feels like it's part of a heady romp, not a somber cortege. When events turn even scuzzier, and Theo tries to blackmail Edmund into revealing intimate details of lovemaking activities with Maria, Geither always inserts a pointed rejoinder that punctures the uncomfortable tension.

Much of the credit for the ease with which this borderline material unfolds goes to director Jacqi Loewy, who keeps the interchanges fresh and spontaneous. Her players craft characters who are individually distinctive, yet work beautifully as an ensemble, each actor fitting comfortably into the playwright's quietly creepy -- yet oddly amusing -- little universe.

As Theo, Terence Cranendonk is a thoroughly believable obsessive-compulsive geek. Then he changes smoothly into Theo's interpretation of his sister, employing just enough feminine mannerisms and vocal traits without tipping over into easy drag impersonation. In a performance rich with nuances, Cranendonk brings us close enough to appreciate what Theo misses about the sweet, hippie-ish, enviro-activist Carol.

In supporting roles, Arian Steiner and John Busser turn in deft portrayals of Maria and perfect-buddy Kirk. Busser's tongue-in-cheek ode to potato salad in the morticians-on-a-picnic scene is a small gem. Nicholas Chokan as Edmund also has some nice moments, particularly during his deadpan encounter with Theo-in-drag as "she" gossips like a high-school girl.

There are small moments when the script feels a bit wobbly, such as when Theo reads a poem that's rife with the kind of self-conscious import that is blessedly missing from the rest of the show. Also, the relationship between Theo and his girlfriend Lynne (Nicole Lublin) is never fully developed, so we never quite understand why she seems so attracted to this seriously compromised individual, who freely admits, "I feel dead."

That said, Geither has a definite knack for creating whip-smart dialogue, and the larger issues he raises about the geography of loss in this mortal world we share have undeniable heft. Reason enough to take in this production, just one more in CPT's outstanding, adventurous season.