Danny Boyle gets his mojo back in the dig-vid zombie flick 28 Days Later. 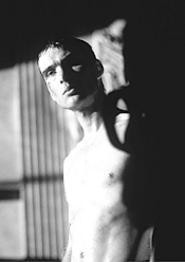 It's the end of the world as we know it, and it's all PETA's fault.

Oh, we humored those wacky vegan extremists when they threw paint at rich bitches in hideously overpriced fur coats. We laughed when they came on conservative talk-radio shows every Thanksgiving to get mocked for comparing turkey farming to the Holocaust. But ya know, when they freed all those chimps infected with zombie-virus from a biological warfare lab, that was a bit much. Now England's a deserted wasteland -- except at night, when the zombies run around in digitally enhanced fast-motion, vomiting semi-clotted blood on things and making rats run away in terror. And all because some health nuts couldn't persuade more people to eat tofu.

Okay, so we don't know for a fact that it's PETA portrayed in the new zombie horror flick 28 Days Later. But hey, PETA didn't know for a fact that Rudy Giuliani's prostate cancer was caused by drinking milk either, and it didn't stop them from proclaiming such on a billboard. Just so we're clear: Giving viruses to helpless apes is, well, bad. Letting 'em loose, however . . . that's worse. That's the film's prologue. Fade to black, roll title, then open on London four weeks later.

Our hero is a delivery guy by the name of Jim (Cillian Murphy, a.k.a. the Irish Jim Caviezel), who has been in a coma just long enough to miss the whole breakdown-of-civilization thing. Given his profession, the film's title actually takes on an extra significance for Britons: Like "six to eight weeks" here, 28 days is the standard amount of time U.K. mail-order companies tell the consumer to allow for their products to arrive.

Jim awakens in a hospital and finds it bereft of human life. He has been locked in his room, which is presumably the only reason he remained, but fortunately the key is right under the door. After chugging a Pepsi (the joy of life he needs at any cost), he emerges onto the streets of London and finds no one there either. Message boards are overladen with handmade "Have you seen this person?" signs, and the nearest church is filled with dead bodies. Or are they? One or two are in fact extremely mobile and clearly malevolent. Technically, they're not "old-school" living dead -- like the zombies of Resident Evil, they're living human beings infected with a virus and can be killed by normal means. Unlike most of their cinematic predecessors, however, they move like wild animals on speed, while still boasting the standard living-dead contagion factor in their saliva and blood.

Jim encounters a few other survivors, notably hard-edged survivalist Selena (Naomie Harris) and a middle-aged taxi driver (Brendan Gleeson) with a teenage daughter (Megan Burns). When they come upon a radio message telling them that the answer to infection has been found, they head off in the still-operational taxi to find the source, but it's hardly the salvation they were hoping for. Without spoiling too much, let's just say that times of trouble can bring out the worst in humankind, which can be as frightening as any monster.

Director Danny Boyle (Trainspotting) opted for digital video for practical reasons -- mainly, because it's very difficult to evacuate whole sections of London for the length of time it would take to shoot on film. Thus, the film mostly has a low-res look. Abetting him in the cinematography department is veteran Dogme director of photography Anthony Dod Mantle (The Celebration, Julien Donkey-Boy, Mifune), whose cinematography has traditionally been the weakest part of the projects he's been involved with. Some scenes are underlit -- the sight gag of graffiti on a church wall reading "Repent, the end is extremely fucking nigh" is not as clear as it should be to gain full audience comprehension and appreciation -- but in general, the film looks decent blown up on a big screen, certainly better than the low-grade trailer in front of X2 implied.

The cheap camera also does for Boyle what it did for Joel Schumacher in Tigerland -- both men had become bogged down in silly visual excess in their previous films (The Beach and A Life Less Ordinary for Boyle; that one with the capes and rubber nipples for Schumacher) and had to get back to the basics of story and character. For Boyle, this means a movie more like Shallow Grave than any he's done since. That dark wit is back: Gleeson gets to be positively Homer Simpsonesque during a supermarket scene in which he discovers the sole batch of apples that has not yet spoiled and goes "Mmmm . . . irradiated!" And the instinctive use of music, so well placed in both Shallow Grave and Trainspotting, is back as well: Choral selections and contemporary pop blend seamlessly to emphasize the bleak new world.

One can nit-pick certain details. How, for instance, does a delivery man suddenly become a deadly assassin, capable of taking on trained soldiers? Why, when you know zombies favor darkness, would you opt to go down an unlit tunnel, rather than take the long way around? And why, once you've done that, would you stop to change a flat tire in the dark tunnel, rather than maybe drive on the rim for a little while longer? On the latter two questions, Jim does offer a rebuttal of sorts -- "This is a shit idea. You know why? Because it's really obviously a shit idea!" -- but in the first instance, Boyle seems to be making some sort of point about human rage, since the virus is also called "Rage." They are us, and we are them, you know. Whatever. The deep thematic concerns are never fully developed, but the characters are, and the story compels.