With the Whiskey Daredevils, Uncle Scratch's Gospel Revival, and Lords of the Highway. Friday, December 9, at the Grog Shop. 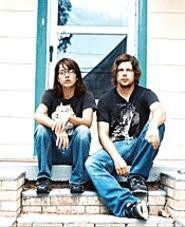 Dax Riggs has one of those lived-in voices that occasionally makes him sound several decades older than he actually is. The thirtysomething Louisiana native first gained notoriety as the frontman for soot-black cult-metal favorite Acid Bath, where Riggs' weathered, world-weary voice added some welcome soul to the band's acidic thrash -- it was one of the few death-metal-influenced groups that you could actually sing along to.

With Acid Bath long defunct, Riggs has returned in the spare, bluesy duo Deadboy & the Elephantmen. Riggs occasionally duets with drummer Tessie Brunet, whose pretty, childlike voice contrasts sharply and sweetly with Riggs' wizened rumble. On their debut, We Are Night Sky (Fat Possum), Riggs and Brunet sing together quietly, with only a gently plucked acoustic guitar to fan their flickering voices. But Riggs is also fond of ratcheting up the volume, leading the band through bloodletting blues stompers ("Stop, I'm Already Dead") and Screaming Trees-style rockers ("Kissed by Lightning"). Through it all, Riggs often sounds like a Dixie Mark Lanegan.

Like Lanegan, Riggs has struggled with hard drugs, and you can hear the wear and tear in his voice. "My body lost control of its soul," he sings forlornly on "Break It Off." Riggs' words are often grim, tailoring this band for late, lonely nights when your disposition is as dark as the sky outside.