For the morbidly curious, MyDeathSpace is a window to the other side. 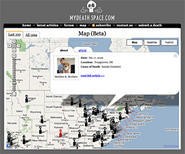 Grace's blond hair is still dripping wet from the shower. She's sitting at her computer in her dorm room at Hiram College, looking out her window at the frosted February ground, listening to punk music and answering some dumb MySpace questionnaire.

"Last thing you ate: pop tarts; What time did you wake up today? 7 fuckin' 30 in the morning."

She's happy today, because her ex, Teddy, is coming up next week for a fraternity formal. "I'm really excited," she writes in her virtual diary. "We both got to grow a lot from being apart for these months."

She's making silly faces, pretending to pull the dorm fire alarm, shining a flashlight in your eyes. "I'm flashing you . . . hahaha," she writes.

The accident hasn't happened yet. Eleven-time DUI offender James Cline, close to blacking out, hasn't gotten into his Chevy Silverado. Grace hasn't climbed into her friend's Dodge Shadow. The two haven't met in a hellfire of gasoline and sharp steel on Route 700 in Burton.

Welcome to MyDeathSpace.com, where you can surf MySpace pages of dead kids. As many as 20,000 people a day log on to listen to the deceased's favorite songs, read their last and most personal thoughts, look through their photo albums -- the snapshots of their lives minutes before the crash, the gunshot, the overdose.

The site was started last year by a bored San Francisco office gopher who read a story about a man who strangled his two daughters to death. He searched their names on MySpace and found the girls' profiles. From then on, 25-year-old Mike Patterson trolled for dead people every day.

He parlayed his fascination into a business -- creating a virtual map of the United States, where you can click on one of a thousand little black skulls that links to the person's MySpace page and an article ripped from somewhere about how they died. "One death or suicide an hour," the site promised.

Within months, MyDeathSpace was getting thousands of hits. Patterson got advertisers -- a dating site, an online pharmacy -- and even created a line of wristbands and buttons, which are nearly sold out. He gets thousands of e-mails from people reporting new MySpace deaths, or complaining that all these suicides are getting BOOOOORRRRIIIINNNGGG!!!!

"People want to see blood and guts," says Patterson. So he'll oblige, surf through his e-mail for juicy ones. There's the girl in Seattle who was stabbed to death inside a McDonald's. "It's a little different," says Patterson, as if he's talking about a fresh new band.

Nick Sonsky is just 16 years old. The stony-eyed, pony-tailed kid from Euclid says he's ready to stop partying so hard and focus on getting into college, so he can become a chemist. His hero is Jim Morrison, the man who said, "Life hurts a lot more than death."

He's soulfully strumming an electric guitar with his eyes closed; he's looking up at you with squinted eyes and a Led Zeppelin shirt. This is before that Friday in September, when Nick went to the high school football game. Before he took half of a methadone pill. Before he took the other half because he wasn't feeling anything (he didn't know it was time-release). Before his mother found him dead the next morning.

"I always thought that methadone was something that came in a cup that junkies had to get," mom Cindy says in a broken, nasal voice that sounds so tired it may stop. "I didn't know anything."

Nick's friends still leave comments on his MySpace page, like flowers on a grave that's floating around their heads in bytes.

Terisa Davis was hooked the moment she first logged onto MyDeathSpace. "I've always kind of had a curiosity about death," says the sassy, 38-year-old art director from Dallas. "It just fascinated me to see that the page is still up after you die. That's kind of your internet legacy."

So Davis became a moderator in the MyDeathSpace chat room, where strangers can not only dissect every detail of the dead person's life, but investigate who might be to blame. On one thread about a girl who committed suicide, chat room members found one of her last MySpace postings, which blamed her boyfriend for driving her to do it.

"There's a lot of people who find themselves to be super-sleuths," says Davis. "They like to put together the information."

Nick Sonsky's girlfriend walked into a forum where total strangers were talking about him, saying he deserved to die for being so stupid to take methadone. She freaked out and started cursing them. A moderator banned her from the site.

In the world of MyDeathSpace, Mark isn't even worth mentioning. The 23-year-old from Navarre wasn't talked about in the forums, mostly because his MySpace page isn't very revealing. There's pictures of him at a drum set with his surfer blond hair and crazy eyes. He likes death metal, works in heating and cooling.

The best MyDeathSpace's PI's could figure out was that he somehow committed suicide last July. If they knew well enough to call the coroner's office, they could figure out he was so broken up about his girlfriend leaving him that he got drunk, tied a rope around a rafter in his garage, and hung himself.

There are no tributes on his page, just one from a couple months before he died from a blond girl named Sparkles: "Wtf? Haven't talked to you for a while! You disappeared . . ."