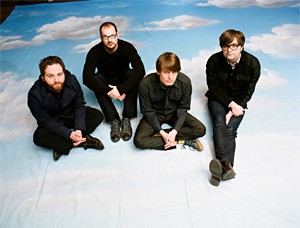 The first song that fans heard from Death Cab for Cutie's latest CD, Narrow Stairs, was an eight-minute epic called "I Will Possess Your Heart," released a couple of months before the album. It's a slow-building track constructed on sheets of sound, adding instruments — first bass, then guitar, then drums, and finally piano — one layer at a time. Singer Ben Gibbard doesn't even show up until the four-and-a-half-minute mark.

It's a curious move for a band that's best known for three-and-a-half-minute indie-pop songs about the fragility of the human heart. It's an even odder choice for the lead single on an album that can be seen as a crucial step in the group's evolution: the leap from indie-rock heroes to big-league hopefuls. Death Cab may have made its major-label debut with Plans three years ago, but Narrow Stairs is, in a way, the real test of the band's pull.

Besides releasing, say, a hardcore hip-hop cut about slinging yayo, an eight-minute pretty-close-to-prog track about an eloquent but still-kinda-creepy stalker is probably the most way-out thing Death Cab could do. "We all recognized it was a great song," explains guitarist Chris Walla, who's also the band's producer and sound architect. "But Ben's arrangement wasn't that interesting. So we tore it apart. It was originally three-and-a-half minutes. We screwed around with it, and that's what it landed on.

"It doesn't sound like anything on the album," he admits. "But it was a good calling-card for the record in terms of the spirit of the album. It felt like it could expand the expectations for what we want to do."

The gambit paid off. "I Will Possess Your Heart" was an immediate online hit, triggering tons of gushing fanboys to post the track on their blogs. And Narrow Stairs debuted at No. 1, beating four other new albums that entered Billboard's Top 10 that same week.

Listen to “I Will Possess Your Heart":

Still, Death Cab — Walla, Gibbard, bassist Nick Harmer, and drummer Jason McGerr — sticks to a pretty familiar playbook on Narrow Stairs. But it's a tougher work, a record stuffed with bigger arrangements and louder guitars. And, as usual, Gibbard — who often writes songs that explore the correlation between happiness and loneliness, and how everything's fucked up when those two things don't align — once again sounds like he's about to crack under relationship pressures.

That's the point, says Walla. "Records sound so impossibly correct [these days] that going back to something that actually has some blood and personality is interesting."

Walla says Death Cab's jump to Atlantic Records in 2004 — after six years on the indie label Barsuk — hasn't really affected the way it makes albums. It's certainly given the Washington band more exposure; no way Narrow Stairs would have reached the top without the big-money push. But as far as writing and recording, things really haven't changed much — even if Walla and crew were expecting some life-altering experiences the first time around.

"Now that we're away from it, it's clear that we were kind of freaked out [when we made Plans]," he laughs. "Some of the decisions that were made about how to make the record, in hindsight, seem ludicrous. We traveled across the country to record the album in the middle of February. It was weird. We had 10 times the budget, but you don't make 10 times the record."

After wrapping their 2006 tour, Death Cab members did their own thing for a year or so. Gibbard returned to the road as a solo artist. McGerr built a recording studio. And Walla produced the Decemberists and Tegan & Sara, and released his first solo album, the Death Cab-lite Field Manual, earlier this year.

When it came time to put together Narrow Stairs, the band's seventh album, Gibbard penned 30 tunes. The rest of the guys took it from there. "He comes in with a bunch of songs that are in varying stages of clarity and completion," says Walla. "Sometimes we don't touch his arrangements. 'Cath . . .' sounds similar to his original demo. But then there's something like 'The Ice Is Getting Thinner,' which got completely turned on its head."

Ever since its debut album, Something About Airplanes — which will celebrate its 10th anniversary with a deluxe reissue on Barsuk later this year — Death Cab has been tagged as the world's most sensitive indie-rock band. Their knack for elegant, often transcendent melodies also set them apart from the scruff-loving hipster pack. They reached their sensitive, elegant, and transcendental peak on 2003's Transatlanticism, which includes the group's best-known song, "The Sound of Settling" — heard in The O.C. and Wedding Crashers. That led to their deal with Atlantic.

"We learned from Plans to make records for ourselves," says Walla. "I don't know what happened with that record. It's such the black sheep now. [Narrow Stairs] feels like the record that should have come after Transatlanticism."

Narrow Stairs' beefier mix and fewer slips into self-indulgence make it one of Death Cab's best albums, ranking it right with Transatlanticism. At turns jarring, coarse, and raucous — relatively speaking, of course; this is Death Cab, after all — Narrow Stairs is certainly the band's most adventurous work. "It's really a polarizing record," laughs Walla. "There's lots of 'It's the best thing you've ever done' and 'It's total crap' [from fans].

"Listening to our older records, we were really never put-together. We're kind of a wreck. But we're committed and inspired. And those are the key things I'm looking for in any record I make or listen to."