Debased on the Series 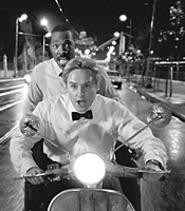 And now, here comes the big-screen release of I Spy (hitting theaters Friday), an Owen Wilson-Eddie Murphy vehicle that updates the 1960s Robert Culp-Bill Cosby series. Although it can't possibly suck more than the film version of Lost in Space, there's no getting around the fact that I Spy, the TV show, is alarmingly dated -- a product of an era when the Cold War was scary and black cop/white cop buddy movies didn't have their own Blockbuster section. And so, while we anxiously await the inevitable movie version of Blossom, we present our Top 5 Asinine TV Shows Made Into Movies.

1. Car 54, Where Are You? (1994) -- Its cast is the first tip-off as to just how stinky this film is: David Johansen, Fran Drescher, Nipsey Russell, Rosie O'Donnell, and Daniel Baldwin are the "stars." The jokes are labored and puerile -- the main character's name is Gunther Toody, for chrissakes. We're pretty sure heads rolled at Orion, the now-defunct studio that distributed this cinematic fart (it was one of the final films released by the company and barely cleared $1 million). If you can remember, think back to how awful the TV version was. This movie's much, much worse.

2. McHale's Navy (1997) -- Two words sum up this clunker: Tom Arnold. Not since Jim Belushi rode in on his dead brother's coattails has a comic lead been so unfunny. Arnold manages, in a mere 108 minutes, to make all television characters seem like stumbling, moronic boors. Of course, that just might be Arnold being Arnold.

3. The Mod Squad (1999) -- We like Claire Danes. We like Giovanni Ribisi. We even like the so-'70s-it-hurts vibe of the original TV show. What we don't like is this insipid modern take on the peacenik relic (the new squad struts like supermodels on a perpetual catwalk and carries guns!). Besides, didn't "mod" expire the same day as Peter Noone's career?

4. Wild Wild West (1999) -- Will Smith's summer streak (Independence Day, Men in Black, Enemy of the State) ends here. A bigger slice of the $100 million budget should've gone toward developing a lucid script (a gizmo-heavy Western is open to many possibilities) or reining in Smith's ego (coasting on charm isn't gonna cut it forever). A wild, wild waste of time.

5. Scooby-Doo (2002) -- Scooby-Don't is more like it. Yes, the cartoon's a part of the pop-culture landscape. But it's always been pretty crappy. Lame jokes, immobile backgrounds, and cameos from folks like the Globetrotters and Don Knotts make it play like the cartoon cousin of Hollywood Squares. This summer's movie is more of the same. Matthew Lillard gets Shaggy down OK, and Scooby himself, while kinda creepy in that CGI-kinda way, is tolerable. But Freddie Prinze Jr.'s drab Fred is even less expressive than Hanna-Barbera's original.