Homegirl Vonda Ward is in a fightin' mood. 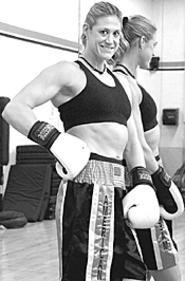 Last May, local boxer Vonda Ward was primed to take down Ann Wolfe. Mere moments into the first round, however, Ward was out cold. "After the loss, I took two months off and didn't leave the house," says the 6-foot-5, 195-pound former basketball star. "I basically hibernated. I was so depressed and so down. I had let a lot of people down." Ward returns to the ring Friday as part of World Championship Boxing at the Gund. The main event pits Craig Weber against Rogelio Castaneda, fighting for the International Boxing Association's World Jr. Welterweight Championship. Ward fights Californian Marsha Valley for the women's heavyweight title. "I really learned how much I want this and what I need to do to reach the level that I want to get to," she says. "I decided this is something I want to continue, because there's something more out there that we need to accomplish. I know I haven't reached my peak." Fights start at 7:30 p.m. at Gund Arena, 100 Gateway Plaza. Tickets are $25 to $50; call 216-241-5555. -- Steve Albanese

The Kent State Golden Flashes-Cleveland State Vikings basketball rivalry isn't all it should be, given the universities' proximity. But it has potential. KSU has won the last three games, including 116 to 66 last December. Saturday's matchup offers the Vikes a shot at vengeance, but Kent has more at stake. The Flashes have posted six consecutive 20-win seasons, made six straight post-season appearances, and claimed four straight MAC East Division titles. Momentum notwithstanding, KSU faces some stiff challenges. Five seniors graduated last year, and the team has eight newcomers this season. Standing out is DeAndre Haynes (pictured), a junior guard who led the conference in assists last year. They'll jump for the ball at 5:30 p.m. at the Convocation Center, 2000 Prospect Avenue. Tickets are $5 to $15; call 216-687-9292. -- D.X. Ferris

There's one possible hitch when a footrace is scheduled for the middle of December: It could snow. Just when organizer Howard Mack thought nothing could stop last year's Gallop for Kids, the fluffy stuff piled up on the 5K course. "I changed the course that morning, basically because the streets weren't plowed," he recalls. "But the county and the city plowed East 22nd, and it was perfect. So we did three laps of East 22nd, and nobody complained." Running starts at 9 a.m. Sunday at the Cuyahoga County Juvenile Courthouse, 2163 East 22nd Street. Registration is $15, $12 in advance; call 216-752-5151. -- Cris Glaser