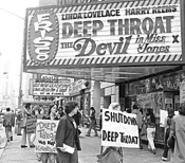 A cynic might describe movies as the most depraved and fantastic system of exploitation ever devised. After all, they trade on the greed and hubris of the financiers, the beauty and allure of the stars, and the trust (or, if you prefer, gullibility) of the audience. No one involved in the process is immune. If this thesis applies to Hollywood films, with a bit of tweaking it fits documentaries and pornography even better. The nonfiction films of Fenton Bailey and Randy Barbato, though, are an exception. In empathetic portraits of tarred heroines such as The Eyes of Tammy Faye and Monica in Black and White -- and now, in the irreverent yet unexpectedly poignant Inside Deep Throat -- the duo have largely succeeded in avoiding both cynicism and exploitation.

Inside Deep Throat is a snappily paced, unceasingly entertaining, and moderately schizophrenic immersion into the life and times of the most infamous and lucrative porn movie ever made. Deep Throat, produced for $25,000 and starring an unknown by the name of Linda Lovelace, opened in a Times Square grindhouse in 1972. Blessed with a sense of humor and boosted by celebrity trendsetters' attendance, coverage in the mainstream media, and rabid police and government opposition, Deep Throat hurtled into the public consciousness. It migrated to theaters around the country, playing to the masses, and, the documentary alleges, grossing some $600 million. (That kind of indie-film lightning, replicated recently to a smaller degree by The Blair Witch Project and Open Water, is still the movie industry's Holy Grail.)

It wasn't all cream and peaches for Deep Throat, however. The Nixon administration and local prosecutors declared war on the film, and it was ultimately banned in 23 states. That didn't satisfy the guardians of public morality, who brought criminal charges against Harry Reems, the amateur actor who played Linda's doctor and "sex therapist." Bailey and Barbato are at their most earnest at these junctures in the narrative, drawing a line from Nixon to Reagan Attorney General Ed Meese to the current influence of moral conservatives on the government's chillingly narrow view of the First Amendment.

The rest of the time, the filmmakers take enormous delight in milking the pop culture of the '70s for camp laughs. The soundtrack is crammed with cheesy one-hit wonders like Melanie and Marmalade; the nonstop flow of interviewees includes Erica Jong, Hugh Hefner, Dr. Ruth, and Dick Cavett. Inside Deep Throat was produced by Hollywood stalwart Brian Grazer (Ron Howard's producing partner) in association with HBO, and one senses the imperatives of accessible entertainment driving the breeziness that buoys most of the film. Despite its deep-seated concerns about censorship and individual freedom, Inside Deep Throat, like Bill Condon's literate but overly careful exposé of '50s mores, Kinsey, lacks the confrontation gene. Perhaps the filmmakers figured that showing the septuagenarian creators of Deep Throat in their pastel stretch slacks and Florida homes would be sufficiently disarming to the self-appointed protectors of America's moral fiber.

The weirdest moment in the film, by far, is Helen Gurley Brown's unsolicited endorsement of semen as face cream. Recognizing that Deep Throat was (and is) a kind of Rorschach test for both female and male viewers, Inside Deep Throat includes several feminists and academics. But it never does come to grips with the central figure of Linda Lovelace, who died a few years ago from injuries suffered in a car wreck. Was she beaten and forced to do the film by her husband, Chuck Traynor, as she later claimed? (If so, he'd be up there with Brian Wilson's pseudo-guru Dr. Gene Landy in the pantheon of '70s Svengalis.) Or was she simply bitter that others cashed in on her hard work?

I saw Deep Throat at a sold-out, aboveground midnight screening at the University of Illinois in 1974. It's impossible to imagine such a show taking place today; indeed, the climate change in the ensuing decades is one of Bailey and Barbato's main themes. I distinctly recall the movie as suitably arousing (and amusing) at first, but the relentless drilling, pumping, slamming, and shaft-inhaling that Lovelace endured was so unerotic -- nay, painful -- that my 19-year-old sex drive was snuffed for two days. My libido could sense that Lovelace wasn't a completely willing participant, yet Inside Deep Throat refuses to take a position. Evenhandedness is a wonderful trait in documentaries, but sometimes a dash of cynicism is required.