The city's broke, and she's surrounded by stiffs. Was there any question she'd fail? 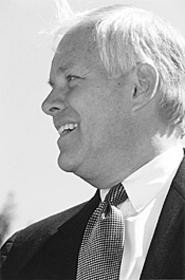 Imagine that you've just taken over as manager of a dying store. Its sales and reputation have been declining for 40 years.

The last manager, a dime-store tyrant whose Napoleon complex should be a Smithsonian display, had a gift for grabbing all the credit while selling out underlings with all the blame. The best workers fled, leaving cronies and stiffs to man the shop. The accountant collected unpaid invoices as keepsakes. The counter help was too immersed in turf wars to attend customers.

Nonetheless, the owners expect big, bold changes. It matters not that revenue is flying south so fast it can't be tracked by air-traffic control. You're just supposed to fix it all out of thin air. You got a problem with that?

This, essentially, is the situation Jane Campbell inherited when she became mayor two years ago. It's little wonder that her reign has gone so badly. Initially seen as a smart, promising technocrat, she's now viewed as the embodiment of weak leadership -- timid, idealess, floundering on the defensive.

Don Plusquellic could have predicted this. When he took over as mayor of Akron, he inherited much the same situation -- a dying town short on possibility, long on Northeast Ohio's patented pollution and decay. He's slowly nursed it back to life. But it's taken him 18 years, and his patient still won't be running any time soon. He knows the path Campbell walks.

"If she made one major mistake," he laughs, "she didn't stop long enough to figure out the total problems inside the city of Cleveland that she would be blamed for. Most people don't really want to walk into a situation that's so bad, you don't have a chance of being successful."

But he knows she would have run anyway -- just as he did.

Campbell arrived in the worst of times. Jobs were fleeing like frightened deer. The police department was bloated and running overtime scams. City council functioned only to fight. And former Mayor Mike White so mismanaged the city, he should have been an executive at LTV. "They literally stopped paying bills [in order] to have a cash balance at the end of the year, and they had drawers full of unpaid invoices," says Plusquellic.

Add to it the aftermath of September 11. Everytime the feds announce an ambiguous terror-warning, mayors must beef security at places like sewer and water plants, spending top dollar chasing ghosts. In New York, for example, the additional cost is $1 million a week.

With no money at her disposal, Campbell's crowning achievement was simply hiring accountants who could operate a checkbook. But no one gives you ticker-tape parades for competent bookkeeping. "I keep hearing business people say she's not making anything happen," says Plusquellic. "How do you make something happen when you don't have any money?"

It doesn't help that Campbell's surrounded by stiffs. Under Frank Jackson, city council has become a non-entity; it no longer even provides the entertainment value of quality knife-fighting. The county commissioners' big idea was an arts levy masquerading as a jobs program, conducted with all the savvy of a drunk trying to sell you his watch. Congresswoman Stephanie Tubbs Jones is invisible. Does she even work here anymore? And while Cleveland bleeds, Dennis Kucinich burns through millions in taxpayer money, courting the all-important tofu-and-Brie vote in L.A. "He's running around Hawaii and shit like that, and we're trying to get our next meal," says one insider. "And he's this self-proclaimed big Cleveland guy."

Forget about the business leaders. God save us from the executive caste.

The Convention & Visitors Bureau blew its money on golf tournaments and convincing French waiters that they really should visit sometime. The Growth Association proffered ideas like man-made islands and moving the Shoreway, which have the fiscal probability of a Dairy Mart clerk buying a mansion in Bratenahl. Cleveland Tomorrow's big idea was a new convention center, which has a 20-year record of failure in virtually every city in America. But the big names in business lined up nonetheless to fight over the swag. They view the city as an unarmed village waiting to be pillaged.

Yet these people have the luxury of hiding and pointing fingers. A mayor stands alone. And Campbell, unfortunately, hasn't stood tall.

It doesn't help that she's soft and measured in a town that fancies tough-guy action figures. Nor does it help that, without money, the best she can do is a 30-year plan to beckon rich guys back to the city.

But Campbell has also bungled much under her control. She looked like a scolded child when Channel 19 drilled her for excess security expenses -- though police escorts for your kids or a comp SUV for hubby wouldn't even qualify for the Top 50 Moments in Cleveland Graft of the last five years. She may even have had a legitimate excuse. Campbell once told Plusquellic that family security was required by city ordinance or charter. But when Scene called Press Secretary Celeste Glasgow to verify this, she blew us off. If White took his communications lessons from the Kremlin, Campbell got hers from Marshal Tito. It makes her look like she's always running scared.

Worse, when the light shines bright -- as it did during the convention-center debate -- Campbell tends to hide in the wings, waiting to see which way the wind blows. It's not a bad strategy: Let these dumbasses take the hit for their own stupid ideas. But it's given her the reputation of a cautious follower. No one rallies around the flag of caution.

Without question Campbell is bright. She has a big heart and a mastery of municipal mechanics. Were Cleveland a Sunbelt city, she would likely be hailed as a smart mayor who stays out of trouble and makes the trains run on time. Who cares if she has the charisma of a mackerel?

But this is the Rust Belt, where only messiahs need apply. And it's hard to fault anyone who can't live up to that expectation.