The Stills sound like post-punk greats of yesteryear -- but don't tell them that. 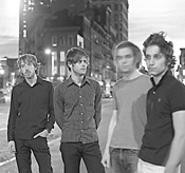 "Echo and the Bunnymen! Echo and the Bunnymen!" Stills drummer Dave Hamelin, who's been yawning uncontrollably for the past 15 minutes, is suddenly shouting into the phone. It's as though he's been awakened from a pleasant afternoon nap by the sound of air-raid sirens. Call it the anxiety-of-influence effect: Ever since releasing its debut EP, "Rememberese," last year, the Stills have been nagged, trailed, kidnapped, and held for ransom by critics likening the Montreal-based band to the Bunnymen.

The thing is, Hamelin insists, there is no Bunnymen influence.

"Okay, let me tell you about Echo and the Bunnymen," he continues, quieting, but not quite calming down. "I don't know anything about them! I mean, I do now -- we opened for them a few times this fall, so, you know, duh. But I write the songs for the band, and I'd heard of them, but I'd never heard them. The Cure, sure. Smiths -- absolutely. But the first time I ever heard an Echo and the Bunnymen song was midway through recording the LP, after all the songs were pretty much done, and my girlfriend downloaded 'Killing Moon' and played it for me."

"I guess, maybe, I can see where people are coming from with the comparison," he allows. "But not really. Maybe the delay pedals. And anyway, by the time we started working on Logic Will Break Your Heart, we were already starting to move away from that, um, 'new wave' sound. I don't know," he continues, unwilling to relinquish the thought. "It doesn't really bother me that much. I guess I'm just sick of all the context that's been attached to us -- it's like, people should just listen to the music and figure it out for themselves."

Bands inevitably prefer that people "just listen to the music," but the Stills have definitely been the victims of their own good fortune, contextwise. At this particular moment in the history of rock, it was pretty much inevitable that four high-cheekboned art-school boys sporting messed-up shags and a "the" on the front of their band's name would yield more than a few Strokes comparisons. Add to that the Stills' opening slots for groups such as Interpol, Yeah Yeah Yeahs, and the Rapture, and you've got to figure that the band's dark, lush art-pop was just making it easy for critics looking to fill the Echo and the Bunnymen pigeonhole in the rock scene's post-punk hall of mirrors.

And then there's the Vice magazine connection: For the unaware, Vice is the caustic, breezily pretentious bible of metropolitan hipsterism, trading in the kind of meta-conscious, cool-because-it-isn't faddishness that promotes the wearing of mullets and, until they went mainstream, trucker caps. The Stills, related by city of origin to the magazine's founders, were the second signing to Vice's record label -- making "earnest young band" a hard sell, despite the fact that music seems to be the one thing everyone at Vice takes desperately seriously.

But, Hamelin asserts, the Stills are an earnest young band, right to the marrow. Naive, high on big ideas, ambitious, brotherly, and just a little bit shy. The shyness, in fact, is what probably accounts for those Echo and the Bunnymen comparisons.

"So, [vocalist] Tim Fletcher and I have known each since I was like 13, and we'd been in and out of bands together," Hamelin recalls. "And we were playing with some people who thought these songs I'd written were crappy, so we decided to record them ourselves. Only, back then, both of us were too embarrassed to sing on tape in any kind of, um, clear way." He clears his throat a touch, suggesting some embarrassment about the embarrassment. "So we went kind of crazy with the delay pedals. That's it. We liked how it sounded. But we're getting over that now.

"I just don't want people to think we're one of those young bands that has one decent album in them and then whoosh . . ." He jumps back in, before any follow-up question can be asked. "We're a band with a lot of ideas -- like, I've already got most of the songs for the next record written! And it's going to be different!"

Hamelin is now interviewing himself.

"Not that I don't like Logic Will Break Your Heart," he continues. "I do -- I like how the songs get more aggressive when we play them live, and when I accidentally hear one of them on the radio or in a bar or something, there's always some moment I'm really proud of in it -- just little things, like the way a guitar part comes in or something. But I also want to explore new territory. In fact, I think it's kind of inevitable."

Hamelin goes on to explain that one of the effects of touring so much in support of the "Rememberese" EP and Logic Will Break Your Heart is that it's opened him up to more experiences.

"Like I said, I write the songs myself," he reiterates. "And then I bring them to the band after I've already got most of the parts worked out. So all the songs on Logic -- they were conceived down in my basement, just me playing guitar and fooling around with some melodic idea. Since I know that I'm a changed person from having seen more of the world, that's why I know that the music has to change too. Because it comes from me, and I'm different."

Hamelin's internal dialogue continues with a rumination on whether one has to leave one's own sleepy burg in order to develop creatively.

"Okay, look at Kant," he counter-posits to himself. "He never left his town in Germany -- not once, not a single time. At least I don't think so. I mean, every day he would take a walk at the same exact time; people in town would set their clocks by his walks. And he definitely did some important work -- Critique of Pure Reason, for example." He stops, thinks for a minute. "I guess, theoretically, the Stills could stay in Montreal forever and do some good things regardless. But I don't want people to set their watches by us. I think it's better to be surprising. Don't you?"