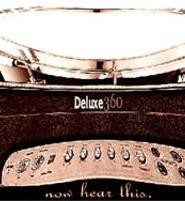 Deluxe 360 is a new project featuring Joe Frietchen, the former bassist of Kidd Wicked, who ruled the city when the drinks were cheaper, your hair was bigger, and you could stay out later because you didn't have kids. This special night will feature friends from the old days -- Jaime St. James/Black N Blue drummer Todd Shelly drums for D360, and Outta the Blue/Magna Fi frontman-guitarist C.J. Szuter, whose new band opens the show -- but it won't be a nostalgia night. "It's not the '80s style that we have been associated with in the past," says Frietchen, who just recorded the Now Hear This disc with former bandmate Billy Morris. "It's songs written from the heart about my life, Todd's life, everything we have experienced the last couple of years. What we have here is a case of the rhythm section having the balls to step out front and lead the way." Get a taste online so you can sing along: www.myspace.com/deluxe360.