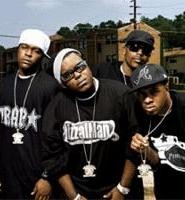 It was inevitable that crunk would spawn its own subgenres, so you can pencil in Atlanta's Dem Franchize Boyz atop the nascent "snap music" movement. The main competition is D4L, who proved less really can be less on the ridiculously minimal hit "Laffy Taffy," which taints the victory somewhat. But despite the Boyz' equally nonexistent single "Lean Wit It, Rock Wit It," the group's otherwise more substantial self-titled debut suggests they'll at least be around for crunk's next mutation.

Babyfaced singer Chris "Run It!" Brown has been touted as the future of R&B, and New Orleans rapper Lil' Wayne has survived that sort of teenage hype, but it's show opener Ne-Yo who has the brightest future on this bill. Not surprisingly, he's also the sore thumb: His forte is classic soul, not crunk-friendly club fare, and his self-written debut, In My Own Words, shows he has a pen the equal of his voice.