After blackface, gay-baiting, nervous breakdowns, and the Aryan brotherhood, Turbonegro reclaims the States. 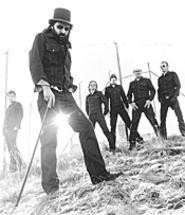 "If anyone can come up with a name . . . ," sputters Turbonegro bassist-mastermind Happy Tom, attempting -- via cell phone from an Oslo taxicab, no less -- to hang a handle on the Norwegian death-punk band's upcoming excursion to the U.S. Bible Belt. Perhaps he's trying to top last summer's "Res-Erection" festival tour. "The Sex Pistols called their U.S. tour 'Flogging a Dead Horse,'" he mentions. "This one's called 'The Dead Horse Rises Again, Goes to a Workout Studio, and Looks Pretty Damn Good.'"

Tom's selling himself short. The 2003 version of Turbonegro looks good enough to win the Breeders' Cup. After a four-year absence, following singer Hank von Helvete's well-documented schizophrenic breakdown on tour in Italy, Turbonegro has completed Scandinavian Leather, the first great rock album of the 21st century. It opens with a moody, keyboard-laden introduction inspired by an episode of Miami Vice. ("Sonny was driving over the causeway after visiting Rico in the hospital," Happy Tom explains. "I thought, 'Poor Sonny; I hope he's gonna be OK.'") From there, Scandinavian Leather pillages high- and low-rock culture with equal abandon. Bombastic, highly strung string opuses ("Fuck the World") crash head-on into infectious two-minute glam-punk blasts ("I Want It All"). Guitar solos run rampant, but never get in the way. Every song is as memorable as the last, which is to say, very.

Scandinavian Leather is a concept album in every sense of the word, according to Happy Tom. "It's Detroit 1973 meets L.A. 1983 meets Stalingrad 1943." While the rock literati will easily grasp Turbonegro's worship of various Motor City madmen, Happy Tom sees the other two phases as equally important, if not more so. "In 1983, Randy Rhoads had been dead for two years, but his soul was still looking down on the Sunset Strip. It's an important part of rock history, but everyone is embarrassed by it. Stalingrad 1943 was the turning point of World War II. We're the Red Army. We're wiping out all the bullshit that came into power and was taking over. This is our revenge on the retro-rockers."

Revenge has been a long time coming. For its first seven years, Turbonegro toiled in obscurity as a shock-rock band, best known for using outrageous samples and wearing blackface -- even when sharing the bill with Rastafarian hardcore heroes Bad Brains. "We played with Bad Brains in Oslo," Tom chuckles. "We were wearing blackface and Afro wigs next to their dreadlocks and Afros. They thought we were the coolest thing ever and gave us lots of pot."

In 1996, Turbonegro wiped off the face-paint in favor of denim suits and man-love. The album Ass Cobra featured such homoerotic AC/DC punk anthems as "Midnight NAMBLA," "I Got Erection," and "Sailor Man." Elaborate stage shows featured Hank doing a nude handstand with a sparkler lodged where the sun don't shine. "The gays are a good market segment," says Happy Tom. "They don't have kids and have more disposable income."

Ass Cobra lifted Turbonegro out of obscurity on the continent and onto the European festival circuit, where it met Aryan resistance. Says Tom, "We were playing a festival in Hamburg, when a Nazi started shooting at us with a flare gun. The whole stage was on fire, and the crowd was evacuated. We kept playing, because we didn't know what was going on." To this day, Turbonegro continues to have run-ins with the Reich. "They'll sieg heil the stage and say shit to Hank," Tom explains, "but he reminds them that Michael Kuhnen, the German Nazi leader, died of AIDS. And that they're a bunch of fairies."

For 1998's Apocalypse Dudes, classic-rock wunderkinds Euroboy (guitar) and Chris Summers (drums) joined the fold. While traces of AC/DC and garage punk still lingered, glam rock à la Ziggy Stardust and Mott the Hoople ruled the day. After nine years, Turbonegro's chops finally reflected its taste. "We listen to everything from Phil Spector to the Ramones to trance music," Happy Tom explains. "There's three certain chords that keep things going." He pauses. "They're a secret, of course. If I told you, I'd have to kill you."

Unfortunately, by the time Apocalypse Dudes hit the shelves, von Helvete broke down, and Turbonegro broke up. In America, the band's history of playing in front of tiny, indifferent audiences was erased from the public consciousness. Instead, they were recast as a denim-clad Jesus who died for punk rock's sins. Turbojugend ("turbo youth") fan clubs sprouted across the globe, as sales for both Apocalypse Dudes and Ass Cobra continued to swell. In 2001, work began on a Turbonegro tribute record titled Alpha Motherfuckers. Unlike most punk-rock homages that feature up-and-coming bands trying to siphon juice from more famous artists, Alpha Motherfuckers was a love letter featuring established American acts such as Queens of the Stone Age, Nashville Pussy, and the Dwarves, along with fellow European rockers Amulet and HIM.

With last year's release of Alpha Motherfuckers, the groundwork was laid for Turbonegro's return. A healthy von Helvete joined his old mates just in time to watch the Scandinavian-led garage-rock revival explode. Yet the appeal of bands like the Hives mystifies Happy Tom. "In Scandinavia, everyone is trying to be honest. 'We're honest rock and roll,'" he mocks. "What the fuck is that about? We're the most flamboyant European act since Liberace -- and he wasn't even European! We're the Siegfried and Roy of rock and roll!"

Like any good Vegas act, Turbonegro's comeback shows on the Res-Erection tour featured lots of pyrotechnics. "After what happened in Rhode Island, we can't take pyro to the United States," Happy Tom complains. "Sons of Texas oilmen can use pyro all over the world, but not the sons of poor Norwegian fishermen."