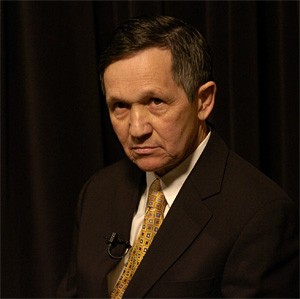 Ask any West Side Democrat about Dennis Kucinich, and you'll get two general responses. Theoretical lefties will tell you he's "right on all the issues." Lay Democrats offer some adaptation of the fighting-for-the-little-guy theme.

To the west of the Cuyahoga, these are notions as sure as the fecal count off Edgewater Beach.

Then ask for Kucinich's accomplishments over 12 years in Congress. The conversation becomes stuttering and rigid. Maybe there will be mention of how he lessened train traffic through Lakewood. But mostly there's empty, defensive air.

Such devotion to the unknown is perfectly natural. Voting tends to be a gut affair. We cast our ballots based on emotion and instinct, scraps of things we hear. They call it human behavior. It just doesn't work very well.

It's why Congress has an approval rating lower than the president's, but we re-elect the same guys 98 percent of the time. It's why downstate conservatives vote for those who denounce gays and praise Jesus — and push economic policies that cut the faithful's knees. And it's why we keep electing Dennis Kucinich. He tells us everything we want to hear. But 12 years later, we're no closer to holding those pretty things in our hands.

You have to hand it to the guy. He plays us like Guitar Hero on the remedial setting. For yellow-dog Democrats, he's a fiery voice for jobs and health care, a fearless antagonist of that vague and ominous enemy, the wealthy special interest. For the cerebral left, he offers plums and cherries like the Department of Peace and the impeachment of Dick Cheney.

We lap it up like Labradors. He's the one guy who gives eloquent voice to our wishes, burning denunciation of our foes. Because in the parallel universe of politics, we've come to believe that talking and fighting are the same thing.

But take a closer look at his record. Search for one slab of concrete he's laid, one shingle he's pounded to make any of this happen. You won't find any. That's because there's a very simple truth about Kucinich: The self-proclaimed "workers' president" has a serious aversion to work.

Defenders will tell you it's hard for one member to do anything in Congress. True. It's a battle royal among 535 clinically alarming egos, perhaps the most competitive workplace on earth. Talking does no good. At any given moment, there are 100 guys talking louder and prettier than you.

So you do as you would on any job: Put your head down, work your ass off, make your bones. If you want to be someone, these are the rules of the working life.

Senator Sherrod Brown understands this. He's quietly made himself an expert on trade. Should there be an Obama presidency, and Washington rediscovers the golden chalice of American politics — secure jobs that pay enough to live — the Senate will turn to him for advice. Finally, an Ohio guy with Ohio sensibilities will be in a position to do something about manufacturing.

But Kucinich has made himself an expert on nothing. He's the flighty co-worker who leaps from one task to another, boldly announcing how he'd do things better, then moving to a different task. You know how these people are viewed on your job. It tends to involve a lot of expletives. And it's the same way his own party views him in Congress. They just want him to shut up and get out of the way.

So when Washington eventually decides to do something about health care, education, consumer protection, the war, Kucinich will be on the outside looking in. He'll have no more say in crafting these bills than you or I.

But let's forgive him for a moment. Let's admit he's not cut out for work. His gift is his tongue, his flair for the dramatic, his ability to shine light on what ain't right. The smart fighter plays to his strengths, and a congressman can pack a lethal punch if he has the will.

There is no shortage of righteous battles in Cleveland. When National City was on its predatory lending spree, Kucinich could have been outside corporate HQ protesting every day, embarrassing executives into forgoing the serial rape of their hometown.

He could be at government construction sites, shaming public officials into abiding by their own minority-hiring laws.

He could use his staff to investigate corruption in HMOs, campaign finance, the Cleveland schools, the Mike White administration.

He could do what Brown has done — use his campaign funds to rent buses, so old people could buy cheaper medicine in Canada.

He could be the one Democrat who stands up every time Jimmy Dimora buys land from Sam Miller at five times its value.

To simply do one of these would have doubled his list of accomplishments over the past 12 years. But here's another truth about Dennis Kucinich: He's a George Bush kind of fighter — a guy who bravely speaks from the safety of the officers' tent, never risking his own sweat and blood.

Which means we've spent about $10 million — including his salary and federal subsidies of his presidential campaigns — so Dennis can create fabulous symbolism. Peace would be good, but the Department of Peace hasn't gone anywhere. Cheney may be a shirt tail relative of Satan, but he still has a job. Kucinich doesn't have the juice or drive to push boulders like these. He just plays like he does on TV.

Meanwhile, winnable fights — the kind that might put bread on someone's table — are ignored. The problem is that they require real work, real tenacity, real bravery. Dennis doesn't have the stomach.

So vote for him if you will. And when you're short on rent, short on the doctor's bill, take solace that somewhere, Dennis Kucinich is talking about having your back. He's sure to get around to it. Just give him another 12 years.

In the meantime, see if you can pay the heat bill with symbolism. That's worked pretty well for us so far, hasn't it?