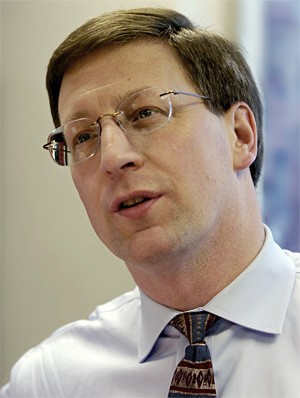 Joshawa Webb could have been just another crack dealer, one more thug caught peddling his wares to an undercover DEA agent in Mansfield. But Carlos Warner, the federal defender on the case, wasn't convinced. He and others in town were growing suspicious of the drug busts in Mansfield. Too many people were saying the feds nabbed the wrong guys.

Webb's sale to agent Lee Lucas had been recorded on a hidden wire, but there were gaps in the tape. Experts agreed that either someone tampered with it or it didn't include the whole conversation.

So Warner went to see Lucas' informant. Jerrell Bray, who had previously done 14 years for manslaughter, was in jail, accused of shooting another drug dealer. Yet Warner found him crying, ready to spill his guts about putting innocent people behind bars.

What Warner learned that day helped prompt a massive investigation of Lucas and Bray, along with the release of at least 15 wrongly convicted men. And it would shine a spotlight on Cleveland's federal public defender's office.

This was no ordinary feat. On the ladder of legal prestige, public defenders are only one rung above the criminals; they're the guys who couldn't make it in the real world, so they had to settle for government work.

But here in Cleveland, where crime is a booming industry, the federal defender's office has beaten the odds. Some even regard it as one of Northeast Ohio's best criminal-defense firms.

"I think taxpayers are getting more bang for their buck in that office than in any other," says lawyer Terry Gilbert. "They really know what they're doing."

Of course, they're not winning any ribbons for it. After all, they're the people who defended David Verhotz, caught embezzling $41 million from Key Bank, and Mohammad Zaki Amawi, the Toledo man accused of conspiring to ship bombs to Iraq. And they're funding their work with your tax dollars.

But the man leading the charge, Dennis Terez, is tough to hate. He's an unlikely warrior for the downtrodden — a Polish guy from Maple Heights who ditched a cushy partnership at Squire, Sanders & Dempsey to represent people he admits are "scum of the earth." Yet he sees himself as a watchdog for justice, making sure everyone gets treated fairly.

"I'd be just another boring hypocrite if I didn't take all that seriously," he says. "Unless you get your hands dirty in the system, you will not change it."

Tall and perpetually harried, Terez has pale skin, an apologetic manner, and oversize glasses that give him a Charlie Brown air. He speaks softly, almost in a whisper. Unlike his colleagues on the other side of the aisle at the U.S. Attorney's Office, Terez's name seldom appears in the paper. He doesn't stage protests for the TV cameras or wail about the injustice of mandatory prison terms. Instead, he prefers to work behind the scenes, earning respect from all sides for his diligence and detailed knowledge.

"He's not a rabble-rouser; he's not a radical," Gilbert says. "He's like a criminal-defense Boy Scout, and he gets attention that way."

Terez graduated first in his class from Georgetown's school of foreign service and started his legal career as a clerk for U.S. District Judge Frank Battisti. Years later, at Squire Sanders, he worked on the case that ended court-ordered desegregation and oversight of Cleveland schools. He also helped the city sue Art Modell, to make sure the Browns' colors and logo stayed in town after Modell bolted.

Yet being on the top rung of a major law firm wasn't enough for Terez. He believes fiercely in the Sixth Amendment's promised right to a lawyer and is proud to fulfill that duty — even if it means representing the Ken Lays of the world.

Terez repeatedly applied for posts with the county prosecutor and federal defender's office, "without a nibble" in response. Apparently his dogged idealism was no match for Cleveland's patronage system. Finally, in 1998, after three tries, the defender's office hired him. His paycheck was immediately cut in half.

Over the next few years, he defended Daniel Sheldon, convicted of distributing pictures of young children being raped. Then there was client Geoffrey Benson, who ran a Ponzi investment scheme that swindled millions from people around the world. Terez later negotiated a plea deal for embezzler Verhotz and traveled to Jordan to do research for the Amawi case, even fighting to get back on the docket after Amawi fired him.

"You got to keep fighting for 'em, even when they're spitting at you," Terez explains.

Since being appointed head defender last year, he has pushed to represent clients on death row. Meanwhile, he has gained a reputation for educating other lawyers in town, bringing in speakers, and sending out frequent e-mails with updates on new sentencing rules. "I think he is a breath of fresh air in terms of building the program," Gilbert says.

Roger Synenberg, another prominent defense attorney, remembers representing Donna Moonda, the woman convicted of plotting to have her husband shot to death on the Ohio Turnpike. Terez offered support, giving Synenberg an assistant and investigators to help on the case.

"He's a guy who's unequivocally committed to the greater good," Synenberg says.

On a frigid February night, Terez arrives more than half an hour late for a meeting at Caribou Coffee in Beachwood. To make amends, he buys his guest an oatmeal-raisin cookie, noting that at 9 p.m., this is his lunch. Then he talks for more than an hour — about his love of the Constitution, the importance of defending accused terrorists, and spreading Barack Obama's style of optimism.

Clearly, he could go forever. But there's work in the morning, and this is one guy who can't call in sick. No one else would want his job.