Exploring the twists and turns of the synth-pop band's new boxed sets. 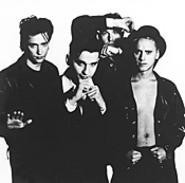 Under most circumstances, the notion of six boxed sets -- for a grand total of 36 discs, 245 tracks, and a shade under 23 hours of music -- dedicated to one band would seem a tad excessive, no? But then again, we're talking about Depeche Mode. Few groups have been as worshiped as this darkly romantic, sexually ambiguous, musically pioneering, and enduring synth-pop outfit. Just watch the 1989 D.A. Pennebaker documentary Depeche Mode: 101, and you'll witness near-scary moments of utter devotion that come close to outstripping the Beatles at JFK or 'N Sync on TRL.

It's likely that hardcore Mode disciples -- and believe us, their numbers are still legion -- have already gotten their paws on this collection from Mute/Reprise (the first three Singles Box sets were originally released in 1998), each one containing six singles and their accompanying B-sides, remixes, alternate takes, and/or live tracks. Together, it's every single the band released between 1981 and 2001, and owning them all would set you back about $270 (each set retails separately for $44.98).

It would also allow you to trace in whole-hog detail the band's evolution from teenage electronic primitivists to widely influential alt-music demigods. The sets break down into six distinct Depeche Mode creative eras. It goes like this: Upon forming in Basildon, England, in 1980, Depeche Mode -- led by principal songwriter/keyboardist Vince Clarke and featuring keyboardists Martin Gore and Andy Fletcher, plus singer David Gahan -- wrote perky new-wave pop tunes such as "Just Can't Get Enough" and "Dreaming of Me," similar to songs by peers Orchestral Manoeuvres in the Dark and the Human League. Call it the "Fluff Era."

During the mid-'80s, the band moved into the "Melancholic Bondage Era." Provocative leather gear was the attire of choice, and Gore's songs were often just as unsettling, as they took on sweeping and tragically lovelorn qualities (think "Stripped," "A Question of Lust," and "Shake the Disease").

The "Breakthrough Era" came next, with 1987's Music for the Masses and 1990's multiplatinum Violator. Now superstars in the U.S., they pumped out impeccably crafted electronic pop anthems like "Strangelove," "Never Let Me Down Again," "Personal Jesus," and their biggest smash, "Enjoy the Silence," all of which retained Gore's semi-dysfunctional lyrics.

Having reached its commercial peak, Depeche Mode subsequently plunged into the early '90s "Troubled Rocker Era." Gahan grew out his hair, descended into heroin-fueled hell, and seemed determined to push the group in an angrier, grungy direction. Thus, the guitar-heavy "I Feel You" and the biting "In Your Room," although Gore tempered such moments with calm spirituality, especially on the gospel-tinged "Condemnation."

In the mid-'90s, Gahan attempted suicide twice, then went to rehab; Wilder quit under extremely acrimonious circumstances; and Fletcher suffered a nervous breakdown. This, of course, led to the "Comeback Era" of the late '90s and new millennium, marked by such strong, well-received singles as "Barrel of a Gun," "It's No Good," and "Dream On."

So that's Depeche Mode, as dictated and demarcated by all those well-known, indisputably great A-sides. But the abundance of B-sides (many of them offered in several different versions) occasionally rewrite some of that history or show a different facet of the band, which is one of the collection's more important and compelling aspects.

For example, check out the post-punky "Ice Machine," the industrialized "Shout," and the haunting, restrained "Any Second Now" -- all Clarke-penned tunes. They demonstrated a penchant for dark themes from the get-go, even if the group wasn't quite prepared yet to fully unleash that vibe. The B-sides also illuminate the generally unheralded instrumental side of DM; no slight to Gahan, but the delicately cinematic "Oberkorn (It's a Small Town)" and the creepy, piano-led "Memphisto" and "Sibeling" rate among the band's finest works, period.

Of course some of the flip sides fit in with the Mode's prevailing zeitgeist. Standouts from that bunch include the impossibly gloomy "Christmas Island," a cover of Bobby Troup's "Route 66" (with its neo-metal guitar underpinning), the super-slinky "Happiest Girl," and the jazzy, nocturnal "Surrender."

If remixes are your thing, sets four through six are far heavier with outside productions than sets one through three, which rely on "in-house" revisions that are actually more satisfying. While it can be entertaining to hear folks such as DJ Shadow, Underworld, Dan the Automator, François Kevorkian, Plastikman, Portishead, Air, the KLF, and Brian Eno mess with Mode tunes, it tends to get a little mind-numbing after a while -- some of the later discs are simply overkill, with seven or eight mixes of the same song.

The dozens of live tracks strewn across the discs are much more enjoyable. "Black Celebration" and "Stripped," recorded in Birmingham in 1986, and "Everything Counts" and "A Question of Lust," taped at the band's legendary 1988 Rose Bowl performance, demonstrate how dynamic and spontaneous the band could be in concert. Yet there are also some clunkers drawn from the 1993 Songs of Faith and Devotion tour. Gahan's voice is ragged, and the group seems to be going through the motions; no surprise, really, given the tumult of that period.

Any collection like this is bound to have some flops, but the filler on these sets is gratifyingly low. Completists will certainly want all six. But for the casual or lapsed fan who wants to do some catching up with a set or two, it's a great way to track Depeche Mode's fascinating 20-year evolution and maybe even rekindle a few of those old, obsessive feelings.