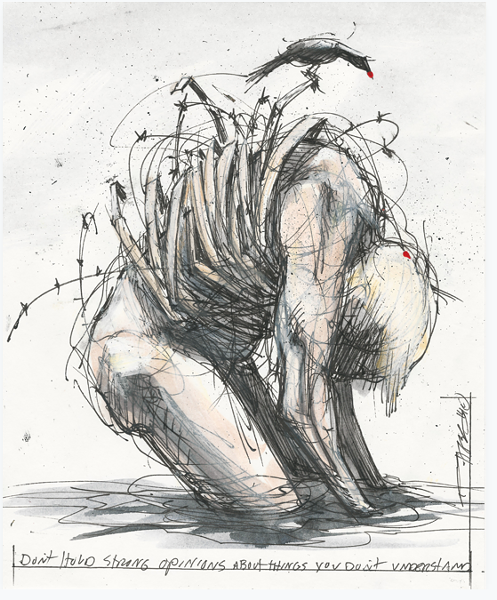 I remember seeing Derek's artwork on flyers that graced staple-ridden telephone poles around the city. This was back in the day, back before social media. I had always seen him as one of those "Art Gods" that was untouchable and unapproachable. It was cool to say that you knew Derek Hess even if it was just as an acquaintance, but nobody really knew the depths of what he was going through, and certainly nobody ever talked about "that kind of stuff."

There is something about his artwork, the lines and the agony, that rightfully draws people in to Derek's world. This new book, 31 Days in May: A Visual Journal of Mental Illness and Addiction, is a heavy tome of Derek's work each day through Mental Health Awareness month, which is observed annually in May.

Meticulously laid out, to say that this book is riddled with powerful images is a blatant understatement. It is appropriate that the first image reflects solutions and hope in spite of darkness and despair; an archer piercing his own ripped-out heart that he holds gingerly with reflection and offering. The second is a collage of naked ladies, prescription meds, money, alcohol and violence bearing its collective crushing weight upon a bound figure wading through the muck, wrapped in what appears to be fencing or exploding ribs, with a cemetery in the background. Hess writes: "The piece is meant to show how overwhelming a burden it can be when all the major symptoms of bipolar mania occur at once."

At the end of 31 Days in May is a section titled "Ink." Getting a tattoo is a deeply personal experience and here we are witness to some incredible stories, from folks who span the globe, of survival and hope, letting go of fear and opening up to the world. Adds the book's editor, Ron Kretsch: "It was really intense to work on, even more so than the Forced Perspective book, because getting so deep into the guts of Derek's images and his own words regarding his struggles couldn't help but be intense. And then after all that, collecting people's stories about their Hess tattoos, and their willingness to share such personal details of their own struggles? That was really amazing. That's the effect Derek's work has on people, and basically spending a couple of months living inside of that work? That'll change you."

31 Days in May opens up dialogue for those with mental illness and addiction and those without. It is a beacon of understanding. In speaking with Derek over the phone, I asked about some poignant moments that are coming out from his tour and the press attached to it. He noted there were people arriving to check out the work simply from articles around the country. "They knew nothing about my art and the artwork, which is great because I'm reaching past my regular audience, who may already be aware of my artwork and what I do. It's great to see that we are able to branch out and break the stigmas."

Hess continued: "Last night a guy came up and had a list of issues he was dealing with. He is a fireman and he never spoke about it out loud due to his the stigma mental illness has around the profession. I'm like, man, this is the strongest thing you can do is to talk about it." Hess said. "It's like how it is in pro sports, which has such a history of machismo and how great that Kevin Love came out and talked about his anxiety, which is what part of this book tour is about; helping removing the stigma and getting people to be open and speak up and out."

The forward by Dr. Joseph Calabrese, Director of the Mood Disorders Program at UH and Professor of Psychiatry at CWRU School of Medicine, adds: "...So it is through his art that Derek shares with all of us his lived experience and expertise in the management of serious mental illness...Through Derek's art he is sharing his experiences and role-modeling recovery. What we can learn from Derek's lived experience is that anyone from anywhere can be a success despite having serious mental illness."