Derf and The City 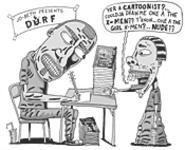 Cartoonist Derf has given readers a twisted, but not totally unrealistic, look at Cleveland life for 13 years. His weekly strip, The City (which is syndicated internationally), has skewered everything from latte-sipping urbanites to suburban cavemen. Derf picked approximately 200 strips for inclusion in The City Collected. "They're the ones that still make sense," Derf says. "The ones that don't make me vomit." The 144-page book translates surprisingly well: You needn't be a Clevelander to get it. "Most people think it's about the city [they're] in," he says. "Which means that I've either done a really good job of tapping into the urban zeitgeist, or we've all become more monochromatic than I feared. I suspect it's more the latter." Derf signs copies of The City Collected from 2 to 4 p.m. Saturday at Joseph-Beth Booksellers (13217 Shaker Square). Admission is free. Call 216-751-3300 for more info. -- Michael Gallucci

The Rock Hall's fourth annual World Festival Day is a mix of maracas, castanets, and conga drums from more than a dozen cultures. Many of the music and dance groups are making the trip from places as far away as South America and Africa. "We wanted to cater to different communities," says the Rock Hall's Todd Mesek. "Most of the bands have a first generation born in Africa or Brazil, but they usually have ties to Cleveland." The music plays from noon to 4 p.m. Sunday at the Rock and Roll Hall of Fame, 1 Key Plaza. Admission is free; call 216-515-1930. -- Cris Glaser

Doctors, construction workers, and radio personalities are up for grabs at Friday's Bachelor/ Bachelorette Auction. The eight women and five men on the auction block include WCPN's Ranita Jablonski, Dr. Wendy Johnson of the Cleveland Health Department, and Jude Howe, an automation consultant who moonlights as a Modä bartender. "He's beefy-hot," drools Jennifer White, the auction's co-producer. "One of those blond-hair, blue-eyes dudes." Bidding starts at $20, with Mistress of Ceremonies April Baer and comedian Michael Polk on the mic. After the going-going-gone is done, the highest bidders escort their "dates" to the bar's VIP room for drinks and hors d'oeuvres. They'll also receive prizes, such as tickets to Shania Twain's upcoming concert and a weekend pass to Bertram Inn in Aurora. It starts at 7:30 p.m. at Modä, 1871 West 25th Street. Admission is $20; call 216-781-3805. -- Cris Glaser