Devil on the Harp

Wallace Coleman mastered the Chicago sound in the blues clubs of Cleveland. 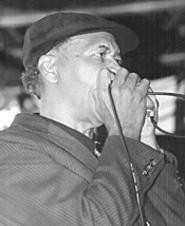 Before Robert Lockwood Jr. was rediscovered by the outside world in the 1970s, the guitar legend was revered by hardcore blues lovers primarily for his splendid work behind Chicago's premier harmonica players. His partiality to jazz harmonies and arrangements made for the savvy, skillful accompaniment that adorns the classic recordings of Sonny Boy Williamson II and "Little Walter" Jacobs. Those records are as important to aspiring blues-harp players as B.B. King's are to their guitar-playing buddies.

Wallace Coleman heard those records. Raised deep in country-and-western territory in rural Morristown, Tennessee, he discovered those gems on big-city radio. But many years passed before Coleman recorded music of his own, and almost as many passed before he'd play with Lockwood himself. Now, acclaim for Coleman is beginning to pile up: The longtime Clevelander has earned multiple nominations as Living Blues magazine's top harmonica player, an award he won in 2002.

When a young Coleman was first taken with the sound of the "French harp," it didn't even occur to him that anyone would play it onstage. "I didn't even know you could do that," says Coleman, now in his sixties and living in the Kamms Corners neighborhood. "In fact, I didn't know till I moved to Cleveland they put [the harmonica] up against a microphone and played with it. Y'know, it was just something that people pulled out of their pocket walkin' 'round the street and played."

Coleman followed his stepfather and mother to Cleveland just over four decades ago, looking for day work. To his delight, the late '50s and early '60s brought many blues stars to town. His weekends were often spent checking out Sonny Boy himself at Loving's Grille on Hough Avenue, where Sonny Boy had set up shop for an extended stay in 1961. "I used go there just about every Saturday and watch his technique, y'know, how he held the harmonica in his hands and everything," Coleman recalls, his genial speaking voice the same deep baritone as his vocals. "I used to ask him some questions. Sonny Boy was pretty cool when he wasn't drinkin' too much." Ironically, it was during this period that Lockwood moved to Cleveland and joined Sonny Boy's band. But neither he nor Coleman recalls crossing paths at the time.

The inspiration lingered, though Coleman mostly played only during brief breaks from his job at Hough Bakeries, where he unloaded trucks for a living. The local blues scene dried up during the '60s, and Coleman turned from live shows to reissued records for inspiration. It wasn't until 1985 that he hooked up with his first band, taking the stage for the first time at age 51, after a co-worker brought a relative to check him out on the job. This led to a yearlong stint with inner-city artist Guitar Slim, whose repertoire was vintage Chicago: Muddy Waters, Little Walter, and Howlin' Wolf.

It was at Slim's regular weekend gig at the Cascade Lounge at East 79th and St. Clair that Lockwood first heard Coleman play. Soon after, the guitarist broke his vow never to work with a harp player again. "[Lockwood felt] most of 'em played too loud," Coleman recalls. "Most of 'em, they played lead. He found out when he heard me play that I was playing the [chord] changes. He hadn't heard any harmonica players in Cleveland that could do that." Lockwood invited him to join his band, but Coleman's day gig was still an issue.

Two years later, as Coleman prepared to retire from his job at the bakery, Lockwood invited him to play in his band -- the first harpist Lockwood ever recruited. His eventual decade-long tenure brought attention from blues fans and writers, who heard in him the continuation of a legendary lineage, beginning with his work on Lockwood's 1997 recording for Verve, Got to Find Me a Woman. The sublime backup skills that Lockwood admired are in evidence on the handful of tracks Coleman appears on, as is his masterful grip on the classic Chicago harmonica sound: He had captured the spare, pugnacious, down-home style of Sonny Boy and the soulful, technically masterful approach of Little Walter.

Even before the release of Got to Find Me a Woman, Coleman had begun sketching out his own path. He had already released the first of his solo recordings in 1996, and he co-led a band with guitarist Cleveland Fats, gigging mostly in Kent. While Coleman continued his adventures in Chicago-style, Lockwood veered more toward a big-band sound. Coleman's traditional instincts were reinforced by blues-harp icon James Cotton, who assured him he had the "real" sound -- words akin to Vince Carter telling you your dunk is pretty fair.

Coleman started his own label, Pinto Blue Music, in 2000, debuting with his acclaimed sophomore LP, Stretch My Money. The album found its way to Living Blues and garnered him his first nomination for the magazine's instrumentalist award. Coleman's solo work and the Lockwood connection landed him a slot at the Lucerne (Switzerland) Blues Festival. His latest, The Bad Weather Blues (available at both www.wallacecoleman.com and amazon.com) has drawn more rave reviews, leading Blues Revue magazine to dub him "One of postwar Chicago blues' most indomitable torchbearers."

The praise emanates from as far as Europe and as near as Wilbert's owner, Michael Miller -- "Wallace is the closest there is to Little Walter" -- but Coleman laments that rock-oriented blues are pushing old-school sounds out of the club scene. "The younger people understand the kind of blues being played today, [but] I don't think they understand the depth of the music . . . the deep blues." Those who do can find Coleman on the tradition-rich festival circuit; he's also testing a small-group, folk-style format at regional colleges.

But mostly he'd love to bring his blues journey full circle. "I'd like to do one more album with Robert," he says. "Maybe a tribute to Sonny Boy and Walter."