Devil With the Red Neck 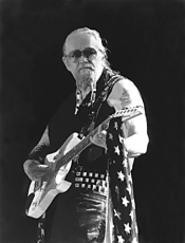 It was 1974, and Abe, a recent high school graduate, was riding in a Chevy van en route to California to live among "other longhairs and freaky people." He and his friends were approaching Nashville when he turned on the radio and heard David Allan Coe's "Longhaired Redneck." Abe's been a Coe fan ever since.

"I recall us laughing at the words and getting a big kick out of the line 'My long hair just don't cover up my red neck,'" recalls Abe, who runs one of Coe's unofficial websites. "Being a couple southern Ohio boys, my partner and I were definitely rednecks, but the era was that of hippies, Vietnam, Kent State, and Nixon. It was a time to rebel, and long hair was the symbol of the times. Here was this guy on the radio, singing a song that caused both laughter and goose bumps."

Coe's rebel tunes are still doing that for teenagers and old-timers alike. His fan base continues to grow, perhaps due to his tours with Kid Rock and the music he's making with Pantera. Regardless, at nearly 62, Coe is pleased by the interest. At a recent Jamboree in the Hills concert in Morristown, Ohio, 81,000 Confederate-flag-waving fans -- many in their 20s and younger -- cheered on the Southern outlaw.

He thinks younger audiences appreciate the realism of his music. "It's not watered down. I believe in freedom of speech. As for the flags, my guitar is painted like a rebel flag. It's just a rebel thing. They don't wave the flags to make any statements about the Civil War or about racism."

Radio has never been tolerant of Coe's subject matter and language. But even with little or no airplay, he performs sold-out shows up to 250 nights a year. "I entertain people. Elvis Presley told me to play to the crowd in front of me, and that's what I do. If I'm in a bar with bikers, I'll play some of my X-rated songs. If I'm doing a family show, I sing songs suitable to a family."

He gets riled when labeled a racist for lyrics such as "working like a nigger for room and board."

"This has bothered me my whole life. There are thousands of movies where the actors kill people, but they don't kill in real life. So nobody calls them killers. But I say the n-word in a song and all of a sudden I'm a racist in real life. But a singer is no different than an actor. A singer is just an actor playing the part of a singer."

Coe's weathered voice speaks volumes about trains, bars, loneliness, drinking, tattoos, women, and desperadoes -- and everything else that makes a great country song. He is also held in high regard for his songwriting abilities. Country artist Tanya Tucker took his "Would You Lay With Me (In a Field of Stone)" to No. 1 in 1973. "Take This Job and Shove It" was a 1977 hit for singer Johnny Paycheck. And bargoers still chant Coe's anthem, "You Never Even Called Me by My Name," and his ever-popular "Jack Daniel's If You Please." Coe has had 63 songs on the Billboard Singles Chart, including "Mona Lisa Lost Her Smile," "Please Come to Boston," and "Willie, Waylon and Me." His latest album, Songwriter of the Tear, is a compilation of "good songs," he says. All but one is written solely by Coe.

"I don't have a favorite song," says Coe, who has released over 50 albums. "Songs are kinda like children. You give birth to them, and they live their own lives."

Coe has seven kids, ranging in age from 9 to 26, and five grandkids. He was raised in Akron, along with a handful of siblings. His Mormon father, a tire and rubber worker, and his Pennsylvania Dutch/Amish mother, who worked at a department store, didn't stay together.

"They had a lot of different viewpoints," says Coe. "And then I had my own. My stepmother didn't want me, and she talked my father into taking me down to the court and saying I was incorrigible. They sent me to Starr Commonwealth for Boys in Albion, Michigan, where I ran away with two other boys and stole a car and went to a detention home from there, broke out, stole another car, went to a boys' industrial school in Lancaster, Ohio, and it was just one thing after another from then on."

Coe was in and out of detention centers and prisons for nearly 20 years. He wears his past like a medal of honor, bringing it up in discussion and mentioning it on album covers. Even today, his rebellious image continues to be fueled by stories of bad-boy behavior.

One Internet message board visitor shared this tale: "I went to see DAC for the first time in November of 2000 at Coyotes in Louisville, KY. I remember sitting there having a good time and all of a sudden right in the middle of the set David stops playing and starts pointing to someone in the crowd and saying, 'Yeah you, you punk motherfucker, come up here, you little bitch.' Apparently someone threw their cigarette and drink at David. Instantly security surrounded him and began to escort him out. But to get out they had to pass in front of the stage. So as he passed, David walked up to the front of the stage and kicked the man right in the head. And then he said, 'And take your fat bitch with you.' It was the coolest thing I ever saw."

Coe's 16-year-old son Tyler, who often tours with his dad and helps sell merchandise, has his own stories to tell.

"This is my favorite DAC story at this time. It happened sometime last week," he says in an e-mail. "After a show we walked to a Waffle House from the hotel. I was the first person in the door, and I was getting a table and I heard a girl in the next booth doing the 'Oh my God, do you know who that is?' thing. So my dad is behind me and he sees that these three people in the booth are in total awe. So what does he do? He sits down in their booth and has dinner with them. That's my favorite story now, but it will probably be something else in a week."