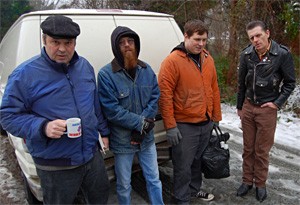 It's hardly surprising that a lawyer would sing about roasting side by side with Lucifer. But attorney-turned-singer-songwriter David Childers isn't talking about himself on the title track of his new album, Burning in Hell. True to his torturous nature, Childers plunges innocent folks neck-deep in pain and misfortune, leaving only enough room for their twisted souls to reflect their sad tales.

In 1999, Childers released Hard Time County, a pithy but apt description of his oeuvre. From the haunting, mournful "Ghosts of Cleveland" to 2001's A Good Way to Die (which includes three devil-dedicated songs), he's demonstrated a real affinity for the dark side. "I write about people in turmoil, people suffering, people struggling," he says. "That's what life is. What interests me is how people overcome and how people survive."

Childers has spent his entire life in North Carolina, the state where he was born. He has a degree in English. But after graduating from college, he returned to school to study law — just like his father. "My dad was a very busy attorney who had also started out as a writer with a lot of promise when he was young," says Childers. "He wrote plays as a teenager. But he ended up losing that desire and becoming a lawyer."

But the fire never subsided in the younger Childers. Approaching a midlife crisis in the '90, David began writing songs in his spare time. He was also coaching little-league baseball and soccer teams, as well as helping disabled people receive Social Security benefits. It was a busy time. "I gave up all that for the music, because it meant more to me," he says. "A lot of people pushed me and said, 'You need to let people hear this.'"

Childers has released eight albums since then and has hit the road whenever he's had the chance. Still, he never really wanted to be a singer. "I always wanted someone else to record my songs, but nobody seemed interested," he says. "So to get them out to be heard, I did it."

Childers penned most of Burning in Hell with his band, the Modern Don Juans, which includes his son on drums. This collaboration gave Childers plenty of time to focus on the lyrics. There are some wonderfully descriptive passages on the album — like the burbling "In the Early Morning," which recounts the story of "a fat boy on a little moped," an accident where a chemical spill "colors the air with a sulfurous hue," and "a night [that's] filled with terrible things that mean to do us harm."

Modeled after the Louvin Brothers' 1960 country classic Satan Is Real, Burning in Hell is an earnest portrait of people in turmoil — but with some twists. "Your Crime" grooves along a strutting rock rave-up, while Childers joyously runs through an upbeat executioner's song ("A crowd has gathered to see you away/For your crimes/For your robbing and raping, killing and stealing," he sings). "It's about 15th-century justice," says Childers. "I had a class in Renaissance literature, where the professor read us a contemporary description of a criminal being executed in public. They pretty much tortured the son of a bitch. It's a sense of ultimate justice."

But there's more to Burning in Hell than Childers' dark, biting wit. The album's slashing alt-country echoes 1970s Nashville outlaws with its wiry twang. Childers admits that the harder sound is his band's influence seeping through. "I got more in common with a lot of gentler kinds of things," he says. "But the way I approach it with these guys, you just can't help but rock like hell. I'm the pussy of the group."

Childers is now on the road supporting Burning in Hell. It's probably his last tour. "It's just too many bars and restaurants and gigs with the cappuccino machine going and people jawing," he says. "I'm too old for that now. I'm not lamenting; I had a hell of a good time. It's been a lot of fun. But I told myself, when it quit being fun, I'd stop. And that's the point I've arrived at now."

Still, Childers says he plans to continue writing, recording, and probing the damaged lives of others. "Some people's entire day is spent just trying to get relief from the pain they're in, and that ain't a life," he says. "They're losing everything they ever had. The music is a reward for getting out there and getting dirty — trying to do something to ease the suffering in the world."

Seeing all that hardship certainly drains Childers. But it's also his chief motivation these days. "I give a lot, but I'm not getting a lot back from it," he says. "But when I see people getting fucked over and mistreated, I get energy. I just can't stand and watch it happen."