The Captains commandeer their field of dreams.

by Chad Felton and Cris Glaser 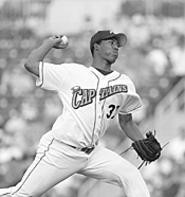 If time indeed begins on opening day, as writer Thomas Boswell once mused, area baseball gluttons will be doubly blessed on Monday: The Lake County Captains' home opener happens a mere four hours after the Tribe's.

The Indians' Class-A affiliate boasted a 97-43 record in its inaugural season, winning the South Atlantic League Northern Division and advancing to the finals. Last season, the Captains attracted more than 6,300 fans to each game and had 30 sellouts. "Our team was unknown," says Luis Rivera, who was voted Atlantic League Manager of the Year in his first season. "All I asked was for our players to give all they had on every play, in every inning."

Rivera cites his own major league career -- which spanned 11 years with the Expos, Red Sox, Mets, Astros, and Royals -- as the formula for his and his staff's approach to meet expectations. "My experience in the big leagues helps a lot," he explains. "I am able to relate to our guys easily, and I consistently stress the importance of fundamentals to help our players get to the next level." The Captains take on the Lexington Legends at Eastlake Park (35300 Vine Street in Eastlake) at 7:05 p.m. Tickets are $5 and $8; call 440-974-9467. -- Chad Felton

Disc Jockeys
It's all in the wrists at the EZ Hat Tournament.

Does your tax return make you wanna throw something? The Cleveland Disc Association has a timely solution: the 1040 EZ Hat Tournament. Two co-ed teams line up in front of their respective end zones, and a member of the offense has 10 seconds to hurl a Frisbee to a teammate. If it isn't caught, goes out of bounds, or is intercepted, the defense takes possession. A point is scored when a team completes a 70-yard play to the opponent's end zone. Think of it as football without the blown knees. It starts at 9 a.m. Saturday at the Windy Ridge Picnic Area of Garfield Park Reservation, 11350 Broadway Avenue in Garfield Heights. It's free to watch, $10 if you want to play; call 440-888-0917. -- Cris Glaser