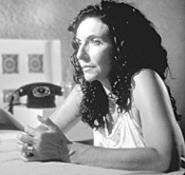 You gotta love John Sayles. No, really -- you gotta, or else a mob of indie-minded cineastes will club you into submission. Sometimes it's easy to comply, as with City of Hope and Sunshine State, both astute portraits of uniquely American class, race, and real-estate struggles that boil down to the burning question of identity. But sometimes Sayles loses perspective, leading to the Northern Exposure-gone-haywire high jinks of Limbo or the somewhat plodding and quite frankly overrated Lone Star. He's rarely a bore, but occasionally he frustrates more than he delights, enlightens or challenges.

Such is the case with Casa de los Babys. Here, the self-appointed spokesman for the world's women and people of color labors over social consciousness, but delivers an affably waffling soap opera. The movie boasts plenty of salable features -- it's about women and food and babies and race -- but its meandering nature squanders a lot of potential. Race-obsessed Sayles realizes that brown is the new black and plays Latin interaction with Yanquis to its trendiest. That's a useful angle, as is the "hungry women" theme, but his narrative and characters spark emotional intrigue only about half the time, leaving his unusually abbreviated 95-minute outing feeling much longer than it actually is.

The titular compound is a tourist hotel in an unnamed Latin American country, where visitors fulfill tedious residency requirements while awaiting receipt of surplus newborns. We follow six white women around as they bide their time en route to potential motherhood. Among them are Irish-Bostonian Eileen (Susan Lynch, The Secret of Roan Inish), who desperately pines to nurture her inner child in the form of a real child, and health-nut Skipper (Daryl Hannah, the Sayles-scripted The Clan of the Cave Bear), whose rock-hard reptilian abs piss off the other women. To wit (or lack thereof), the snotty urbanite Leslie (Lili Taylor) announces that she's ordered vegetarian Skipper a bacon cheeseburger for lunch. Fancy that: Taylor playing another irritating bitch. Such range.

Adding to this accidental clique are plucky Jennifer (Maggie Gyllenhaal), who married too young and then got double-whammied by barrenness, and Gayle (Mary Steenburgen, Sunshine State), an addictive type who has traded alcohol for Christ. The most prickly and intriguing of the women is Nan (Marcia Gay Harden), whose overt racism (wanting to nab a baby before it starts speaking whole sentences in Spanish) and ardent desire for a child (to speed the process, she'll gladly bribe and dismiss the bureaucracy) add up to a bona fide emotional freakshow and the finest and most challenging performance herein.

To be sure, Sayles happily punches hot buttons in Casa, from the incensed revolutionaries wandering the grounds to the olvidado-esque kids kicking around the dusty streets, sniffing paint fumes, unsuccessfully bumming pesos, and illustrating just what happens when the world is cluttered with too many babies and not enough thinking adults. Even crabby Leslie gets to engage in some thought, calling her "last resort" form of Judaism "ethical culture," which adds to the feeling that everyone here is seeking not only babies, but new or thoroughly revised identities. In terms of thematic ambition, it's a tough film to fault.

In its execution, though, the movie alternates between ersatz spirituality ("My army of souls," intones a nurse to her nursery, "ready to travel to distant lands!") and annoying jabber (Steenburgen candidly explains that cheese stops her from pooping). Perhaps because Sayles is once again intensely close to his material, he can't see a way to take these characters he's lovingly shaped -- the film is based on his short novella -- and give them interactions more interesting than shared loitering.

Thankfully, there are satisfying exceptions scattered throughout. A scene in which a young Latina maid (Vanessa Martinez, Limbo) struggles to absorb a huge, emotional, English outpouring from Lynch's wannabe mom -- and then cannot reciprocate regarding her own maternal fumbling and future hopes -- comes pretty close to genius. Likewise, Rita Moreno is terrific here as Señora Muñoz, the manager of the hotel. She's not one to hold back her opinions ("They want to be mothers, and they can't take care of themselves"), but she's also a model of hard-earned diplomacy, juggling a revolutionary son and a lawyer brother, who toils over both the adoption deals and the whitey ignorance.

Oddly, Sayles shot the movie in Mexico, but also notes that adoptions from Mexico are extremely rare, lending his social-realist story an underlying tone of fable. If only there were more of this feeling, as the project really doesn't do anything iconic or cinematic enough to justify big-screen treatment. That said, though, his gift for character depiction and dialogue, and his keen rendering of social clashes, flourish as ever, and you at least gotta like John Sayles for that.