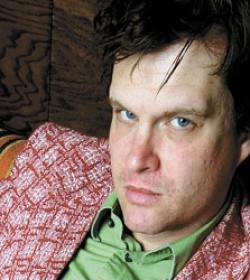 In an era when rock 'n' roll excess has scaled back, Electric Six has brought back the concept of "more is more." Combining tons of guitar, shimmering banks of synthesizers, and humor that features equal measures of tongue and cheek, the Detroit sextet reinvented the rock 'n' roll experience as a contemporary high-energy vaudeville act, a surrealist presentation that succeeds because the band never forgets that engaging songs are at the heart of it all. Electric Six's latest album, Flashy, opens with "Gay Bar Part 2," a non-sequel sequel to their 2001 song from their major-label debut, Fire. It only gets better from there. Frontman Dick Valentine took a moment from the band's hectic touring schedule to field a few appropriately smart-ass questions.

No, that's what is more pathetic about it. We haven't received a dime from any of these products or corporations that we've been name-dropping. It's like an alcoholic thinking the same behavior over and over will get you different results. We're going to continue to name-drop products, thinking that it's going to be a big payoff someday, but the reality is nobody cares.

I used to be a graphic designer so on behalf of all of us, thanks for making us seem cooler that we are on "Graphic Designer." Did you base the song on an actual cool graphic designer? Please say you did.

My wife. She's really cool, and I wanted to pay tribute to her and what she does from nine to five to help me pay the mortgage.

What did you want to do with this album specifically, besides reprise one of your biggest singles and sell out to the home-cleaning industry?

Well, we wanted to give people another reason to have us around a little longer. There's a certain contingent of people out there [asking], "Where are they now? Why won't they go away?" Every year that we come out with another album, it pleases me to know that we're stoking that kind of ire. If people are wondering, "where are they now?," the answer is right in front of them.

You're from Detroit and you write some of the best rock 'n' roll sex songs of all time. Have you worked up some kind of musical tribute to disgraced ex-mayor Kwame Kilpatrick?

No, I'm gonna stay away from that subject. I don't underestimate his ability to come out and get me. Some of the deadliest and most successful hits have been orchestrated from the inside, so I'm gonna keep my mouth shut.

How do you respond to allegations that you're actually descendents of the Tubes from the 23rd century who have time-traveled from the future to stop Bruce Springsteen's son from entering the studio?

I'm personally touched by that. I don't think it's going to help us win over the Fall Out Boy or Panic at the Disco audience. I don't think they know who the Tubes are, nor should they be expected to. I've always enjoyed the Tubes. If I could go into any musical scene, I've always said San Francisco in the late '70s. You've got the Tubes, Huey Lewis, the Greg Kihn Band, Journey, Night Ranger ... people always say they'd go to New York in the '70s, but I think around San Francisco around 1980 is the strongest time and place for music ever.