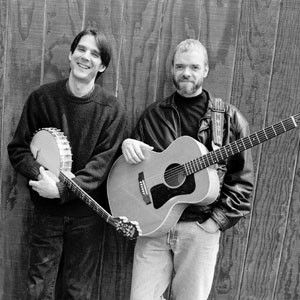 Dale Galgozy & Elliott Ingersoll admit that they’re musical opposites. Galgozy leans toward Woody Guthrie-style folk music; Ingersoll favors British rock and pop. So they compromise by messing around with tempos and arrangements of familiar songs -- like the Beatles’ “Magical Mystery Tour” and “Dear Prudence” -- and stripping them to their barest essentials. “Not that we pretend that we’re going to improve upon them,” laughs Ingersoll. @cal body 1:The singers and guitarists also write and perform their own tunes. They originally paired up 15 years ago in Kent, where Galgozy hosted a weekly open-mic night. They instantly agreed that a fusion of their different styles produced a “creative tension that works.” “I’m more poetic, abstract, and a little melodramatic,” says Galgozy. “Elliott is direct and eloquent at what he wants to say.” During their first decade together, Galgozy and Ingersoll introduced schoolkids to ethnic and world music as part of the Ohio Arts Council. These days, Galgozy teaches guitar and voice lessons in Kent, and Ingersoll is a psychology professor at Cleveland State University. After work, they play at local clubs that share their musical philosophy. “It’s very rare to get a venue where the music is still the main draw,” says Ingersoll. “Where you don’t have to play as loud as the Who to get everyone’s attention.” www.barkingspidertavern.com.
Tue., Sept. 11, 10 p.m.