Difficult singer David Giffels gets all autobiographical in new book 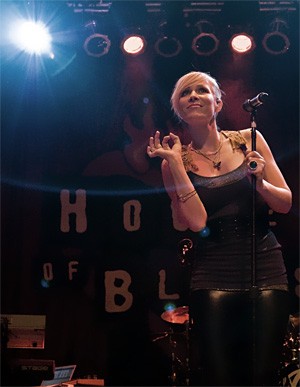 David Giffels' third book, All the Way Home, finds the Difficult frontman fighting the decay that threatens to erase Akron's onetime glory. It follows Giffels and his growing family as they purchase and renovate a dilapidated early-20th-century Tudor and make it their home, one fixture at a time. Giffels, an Akron Beacon Journal columnist, bought the crumbling mansion for $65,000. He saw it as a bargain — and, more important, an investment in his city.

"I really like being part of a community of younger people who openly and unironically embrace Akron as our hometown, and who don't need anyone to explain to them why this is an excellent place to be and to be from," says Giffels. "But I'm constantly running up against people who do need that to be explained to them, so I'm willing to do it. There's an inexpensive quality of life here that is worth bragging about."

Alternately funny and touching, Home is also full of musical references. Giffels learned the do-it-yourself ethic from his dad, but he also draws inspiration from DIY punks like Henry Rollins. The singer borrows chapter titles from Tom Waits, Henry Mancini, and Led Zeppelin. Colorful characters include a drywall crew of metal dudes and an electrician who looks like Rod Stewart. Giffels' wife, Gina, chimes in with "duet" chapters, like a featured guest vocalist. But the book skips Giffels' gig as a member of Akron's '80s post-punk band Difficult and makes no mention at all of him being a musician — aside from an episode in which he tries to run squirrels out of his attic using a 1986 Fender Stratocaster and a Boss DD-2 Digital Delay.

"The part of my life that involves playing music didn't really seem relevant to the story I wanted to tell," he says. "And I was also aware of the danger of being misinterpreted as the unfulfilled, aging rock-and-roller-turned-father with dashed jukebox-hero dreams — which just sounds like the bad promo copy for a really bad movie and definitely doesn't have anything to do with my own personality. There's plenty of angst in the book, but not that kind."

• Bay Village native Kate Voegele's full-length debut, Don't Look Away, jumped more than 100 spots on Billboard's album chart after the singer-songwriter's May 15 appearance on the CW's One Tree Hill. The episode featured Voegele's cover of Leonard Cohen's "Hallelujah," which appears on the iTunes version of the album.

• The Paul Green School of Rock (299 Alpha Park, Highland Heights) will hold an open house from noon until 3 p.m. Saturday, June 7. The music school teaches children and adults how to play rock songs, then showcases the students in club performances. Kids are encouraged to bring instruments and jam; drums are provided.

• DJ K-Nyce releases his mixtape debut, Back from the Future, on Saturday, June 7, at the Grog Shop (2785 Euclid Heights Boulevard). Equal parts rap and dance music, the hip-hop mix is pulsing with old-school electro flavor. Take a listen at http://www.myspace.com/djknyce216. Step-One and Joey Fingaz will spin.