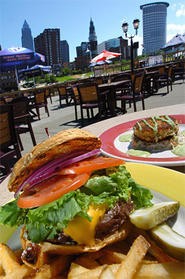 Bold as buccaneers, the gulls squat on the fence posts overlooking the vast patio at Cyrus Waterfront Restaurant, on the West Bank of the Flats, and calculate the risks of swooping in and plundering our crab cake. But alas, a freighter the size of a warehouse looms into sight, hauled around the river's bend by a real-life version of Tubby the Tugboat, and whatever passes for plotting among terns evaporates in the cool evening breeze.

There are reasons why the Flats was once the city's jewel, and these little dramas are among them. So we couldn't be more tickled that this prime riverside real estate is once again open for business.

Admittedly, the start-up was rocky. Despite impeccable credentials, owner and namesake Cyrus Davarpanah (former wine guru and general manager at Valley View's upscale Lockkeepers) encountered enough initial staffing problems to sink a less determined man. Here, we will say only that one of Cyrus' former servers holds the title for Worst Waiter in the World after threatening us with his corkscrew's knife. S-u-u-r-e, he was kidding. But it still sucked.

Based on our most recent reconnoiter, though, that hurdle is now behind Davarpanah: His current crew of servers hasn't quite achieved a gleaming polish, but at least they aren't packing heat.

Plus, there is some real talent in the kitchen in the form of executive chef John Bateman. (Bateman, Cyrus' former sous chef, recently replaced Anthony Seminatore in the kitchen; Seminatore has gone on to Ballantine, in Willoughby.)

Befitting the restaurant's laid-back vibe, Bateman and his crew have adopted a casual, cost-conscious approach. Both lunch and dinner menus are fairly conventional roundups of assorted noshes, starters, salads, and sandwiches, along with a handful of entrées, making Cyrus as suitable a destination for a workday lunch as for weekend partying. (The restaurant hosts live bands and dance parties on the patio most Friday and Saturday nights, as well as before- and after-parties for concerts at the nearby Plain Dealer Pavilion.)

Portions are satisfying and often suitable for sharing; prices are moderate, with most entrées pegged at less than $19; and while the basic ingredients aren't especially exotic, unusual garnishes add new twists.

Take that wheel of warm Brie. An odd choice for inclusion on a summer menu, we still appreciated its unusual garnish -- a gloss of honey and sprinkling of crushed pretzels. On the side, slices of ripe honeydew and an assortment of plump berries expanded the sweet-and-pungent interplay.

Also fresh and fun were twin portions of skewered and grilled shrimp, resting on a bed of plump Israeli couscous. On one skewer, the shrimp were partnered with juicy bits of grilled pineapple and mango; on the other, with grape tomatoes and mushrooms. And no wonder the gulls were eyeing our peekytoe crab cake. Impressively large, and as golden as a Spanish doubloon, this was a true treasure: moist, nutty, and settled on a contrasting field of crisp, subtly spicy coleslaw -- thick drizzles of creamy basil aioli adding the final fillips of luxe.

A lunchtime Cobb salad -- a generous toss of mixed greens, unfortunately weighed down by too much blue-cheese dressing -- suffered from a paucity of the promised grilled chicken, avocado, and egg. But at dinnertime, a Steak Chop salad hit just the right notes, with a reasonable amount of smoky flank steak, settled on crisp romaine, judiciously dressed in housemade buttermilk ranch, and generously garnished with salty kalamata olives and neatly diced carrot, cucumber, and celery.

Among main events, the West Bank Burger was a champ, featuring a half-pound, hand-formed patty of blended beef and lamb, a choice of cheese (we went with the blue for a 50-cent surcharge), and fresh toppings of lettuce, tomato, and thinly sliced sweet onion. On the side, boldly seasoned, freshly cut fries completed the platter of upscale Americana. And a tender 12-ounce grilled pork chop, glazed with a snappy blend of whole mustard seeds, white wine, and honey, provided savory ballast. The side of carrots was undercooked and underseasoned, but the accompanying pouf of thinly sliced spuds au gratin, glorified with butter, cream, and Asiago and fontina cheeses, offered a taste of the kitchen's true talents.

Other small missteps included a side of Israeli couscous, confusingly labeled on the menu as a "salad," that was little more than a mound of hot, underseasoned pasta orbs on a bed of wilting greens. The sweet-potato "hash" beneath an entrée of pan-seared scallops arrived undercooked and dully seasoned. The list of desserts -- cheesecake, chocolate cake, sorbets, and "fresh berry soup," a refreshing mélange of ice cream and fresh berries -- is still a work in progress.

But settled on the expansive patio, sipping a crisp St. Supéry Sauvignon Blanc --one of 14 by-the-glass options plucked from the moderately priced wine menu -- and soaking up views of river and downtown skyline, it was impossible to mope.

Sure, it would be swell if Davarpanah added more landscaping and umbrellas to the space. And sprucing up the indoor dining room's dark, dated interior -- which sports a scuffed, fern-bar motif, complete with the 1970s triumvirate of walnut, brass, and frosted glass -- would be a capital idea.

But why push it? As long as service remains nonviolent, we're inclined to leave well enough alone.