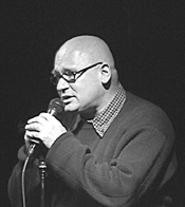 Even misers need to laugh. That's how Cleveland comedian Mike Baker sums up Cheap Yucks, a sporadically scheduled series of showcases for the region's rising comedians. "This series is a place for them to spread their wings a bit and push up to the next level," Baker says.

That next level is apparently at the Winchester, where Friday's headliners include Improv regulars Ryan Dalton and Maria Borgio, "urban-comedy pleaser" Joe Howard, and college-crowd favorites Pee Wee Dee and James Burge. "I hope they'll get some gut laughs, some shock and awe, some intelligence and wit, some downright silly idiocy," says Baker, who scouts comedy clubs and open-mic nights for talent.

Still, he doesn't book a lot of blue humor, "because not that many people are good at it." But that doesn't mean he censors anyone either. "If one comic isn't your cup of tea, for whatever reason, you can always go out to the bar and have a drink and wait for the next one," Baker says. "The First Amendment. It's a wonderful thing, while it lasts." Cheap Yucks start at 10 p.m. at the Winchester, 12112 Madison Avenue in Lakewood. Admission is $5. Call 216-226-5681 for more information. -- Cris Glaser

Swirling around inside the Dust Bowl of the Great Depression are dreamer George and simple-minded buddy Lennie -- the antiheroes of John Steinbeck's Of Mice and Men, opening Friday at the Beck Center. "It's a moving story of two friends trying to carve out a place for themselves in the world, against all odds," says director Fred Sternfeld. But the odds are stacked so high, the men never get to live the American Dream. It's that lesson Steinbeck wanted to teach, says Sternfeld. "It is difficult to achieve, and in spite of a strong effort, plans can go wrong." Of Mice and Men is at the Beck Center for the Arts (17801 Detroit Avenue in Lakewood) Friday through February 29. Show times are 8 p.m. Thursday through Saturday and 3 p.m. Sunday. Tickets range from $15 to $22, available by calling 216-521-2540. -- Cris Glaser

SoVoSó's very design -- a cappella "circle singing," with roots in Bobby McFerrin's Voicestra combo -- is enough to make one cower, cringe, and run away in fear. But the quintet (which dabbles in jazz, R&B, pop, and gospel) actually makes some pretty sweet sounds. It's not nearly as annoying as McFerrin's get-happy blubbering. And with its intricate structure and world-music base, SoVoSó is less a jolly kids' act than it is a skilled group of sophisticated performers looking for perfect harmony in any number of places, styles, and sounds. SoVoSó is at the Ohio Theatre (1615 Euclid Avenue) at 8 p.m. Saturday. Tickets are $22 and $32, available by calling 216-241-6000. -- Michael Gallucci

Guitarist Leo Kottke has a way of making the instrument sound almost one with nature. He's about as organic as these geeky-tech guys come. He recently collaborated with Phish bassist Mike Gordon, upping his profile with jam-band kids and marking new, unstructured personal territory. Kottke performs at Wayne College's Boyer Gymnasium (1901 Smucker Road in Orrville) at 8 p.m. Friday. Tickets are $17.50, available by calling 330-683-2010. -- Michael Gallucci