For Ozzfest stagemates Disturbed and Chevelle, you don't have to be messed up to make millions. 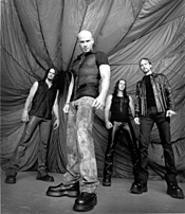 Behind every successful rock star today stand a couple of lousy parents who couldn't care less. From Eminem's pill-popping momma to Good Charlotte's absentee dad to Staind frontman Aaron Lewis's neglectful hippie progenitors, dysfunctional couples with the poorest of parenting skills have inadvertently given a whole generation of rockers and their fans a Billboard chart full of psychodramas.

David Draiman, lead singer for Disturbed, can certainly lay claim to a messed-up childhood. "I got the crap kicked out of me when I was a kid, on more than one occasion," complains the songwriter with the shaved dome, taking a break from some studio work in his hometown of Chicago. He still hasn't visited the folks. "But I'm not writing about it in one of my songs," he says.

Draiman says the screamed lyrics of metal hits such as "Down With the Sickness" (sample line: "No, Mommy, don't do it again! I'll be a good boy! I promise! Don't hit me!") are merely inspired by personal history, not a literal journal of his own tortured upbringing. "I'm really talking about the conflict between the mother culture of society, who's beating down the child yearning for independence and individuality, and the submission of the child." Uh, sure, dude. Whatever.

Chevelle's Sam Loeffler, on the other hand, has nothing but nice things to say about his mom and dad. "I love my parents and my brothers and my sisters," gushes the oldest of the three Loeffler brothers who make up the heavy metal trio, which along with Disturbed is performing on this year's Ozzfest tour. "But that doesn't mean we don't have our own family issues. I mean, with us being brothers, it is hard to get along sometimes."

Together, Loeffler and Draiman make up a kind of mismatched buddy team on this summer's Ozzfest, like a badder Fonz and Richie Cunningham, locked in a battle of the bands at Arnold's.

Both Chicago natives, both entering their thirties (Draiman passed the milestone this year; Loeffler is 28), the Disturbed singer and the Chevelle drummer seem to possess little else in common. Draiman apparently still has genuine beefs with his parents. He recently offered them one of his platinum records as closure for their lack of support in his musical goals -- then complained in the press that they didn't deserve it. "They still never see me play," he said sourly.

Then there are the Loeffler brothers. "We grew up going to car shows with our dad," recalls Sam fondly. "The biggest thing we'd freak out about, when we were little, was who got which Matchbox cars." Chevelle's very name, in fact, stems from a passion for classic cars that the seven Loeffler kids inherited from their Chevy-collecting dad.

Loeffler's band has been embraced by the religious right as an example of a growing trend toward spiritual longing in mainstream rock music -- even Christianity Today found "nothing offensive or crude" on Wonder What's Next, the trio's first major-label release. (The band's debut effort was distributed on the Christian label Word Records.)

Draiman's lyrics for Disturbed's latest release, Believe, by contrast, are teeming with profane anger -- even as the Jewish-raised singer quotes the Torah and encourages the listener to "liberate your mind." A 17-year student of theology, Draiman is an outspoken critic of Christian religions -- a theme that surfaces in several songs. "As far as I'm concerned, the Vatican should be knocked down, the gold taken out and melted down and donated to charity," he says flatly, in a voice that sounds distractingly close to the more talkative half of Beavis & Butthead. "God does not need your money."

Can an emotionally scarred Jewish boy with a devilish braided goatee share a stage with a Matchbox-collecting Christian choirboy -- on a tour headlined by America's favorite dysfunctional dad -- without driving each other (or Ozzy) crazy?

"I honestly don't know what it's gonna be like," admits Loeffler, whose band worked the less-lofty second stage on last summer's edition. "But with the Ozzfest crowd, 'crazy' is not necessarily a bad thing."

In today's metal, a tortured childhood carries as much street cred as a few graze wounds do in the rap game. But turning personal pain into lighter-waving arena rock can be a process more excruciating than Janovian scream therapy.

"It's very frightening," says Draiman. "Because here you go, you've decided to be open and bare a part of your soul to these people, and lay it out on a platter for them to observe. So until you know that the listeners are getting any part of what you're saying, it's incredibly frightening."

To cushion the process somewhat, Draiman strives to vent his personal angst in broader sweeps at society. "'Down With the Sickness,' for instance, wasn't meant to be an indictment specifically against parents -- certainly nothing specifically against my own," Draiman insists. "The record was an indictment of this whole way of life, this set of morals and ethics and rules, that was laid down by the norm in society."

For Sam Loeffler and brothers Pete and Joe, the most torturous part of creating hits in a genre ruled by angry emotions is sometimes just finding enough things to be pissed about.

"Geez, as far as problems go, everyone every day has problems," Sam says. "You know, whether they're money problems, relationship problems. Girlfriend, fiancée, wife. I mean, we can pull from any of those things -- if we want to write about bad things."

It's not exactly the stuff of searing, hatred-with-hooks new metal. But then, Chevelle's strength seems to lie more in generating the mainstream sound of aggression, rather than working through the issues that create the need to express it.

Chevelle's breakout hit, "The Red," on Wonder What's Next, is an angry-sounding song about nothing more than anger itself -- the "seeing red" stage that signals when the average bruiser is about to start throwing punches. "Send the Pain Below," the band's latest heavy-rotation smash, offers a prescription for dealing with anger without pinpointing its symptoms. And the new tune most likely to inspire mosh-pit mayhem is simply about the idiocy of mosh pits.

"That's exactly what the song 'Forfeit' is about," Loeffler says. "How dumb it is to fight over something, to ever come to blows or ever raise your fists at an event where everybody's coming together out of some shared interest."

Loeffler agrees that it should be interesting to see how songs like "Forfeit" are received, when Chevelle plays them on Ozzfest's main stage. It's not like Loeffler is going to get angry about it, after all.

"There's a lot of happiness in our success right now -- and that's a good thing," he says. "For sure, playing shows and having people sing things back to you is a good feeling. And there's nothing wrong with simply enjoying that."