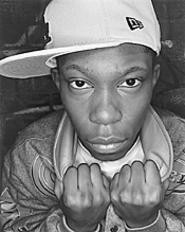 From the credible to the laughable, there's been no shortage of applicants eager to claim Tupac Shakur's crown over the past seven years. It could be, however, that everyone has been looking in the wrong country; in many ways, 18-year-old East Londoner Dizzee Rascal makes the best case yet as the sensitive thug most likely to fill 'Pac's shoes.

Which is not to say that his debut is a great album -- after all, Tupac himself never made one. To American ears, it's not even a hip-hop album. Like most British rap, it's shadowed by the disorienting gloom of Massive Attack and '90s trip-hop while swiping its harsh melodies from cellie ringtones and its fractured breakbeats from garage. Dizzee's electric flow, meanwhile, is a mutation of the jump-up toasting that enthralled U.K. clubs a decade ago, which allows him to escape the accent problems that plague most limey rappers.

But ultimately, it's what Dizzee says that gives Boy in da Corner its uncomfortable weight. The desperation of the album's name manifests itself in nearly every tune, yet Dizzee is more man-child than man and isn't afraid to admit it. The ironically titled closer, "Do It," in which he longs to escape life's nightmares through sleep "for good," recalls the fragile, emotionally stunted Kurt Cobain as well as 'Pac's softer side. Beneath those two dark stars, another just might be born.