Dobama Theatre’s Colder Than Here waits for death, with a smile on its face 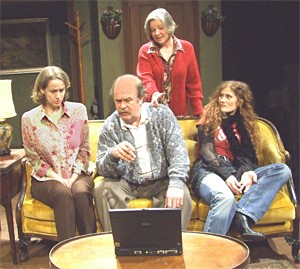 There are few easier ways to immediately establish dramatic tension in a play than to have one character teetering at death's door. And in Colder Than Here, by Laura Wade and now in production at Dobama Theatre, that go-to plot device is leveraged to the max.

The challenge, however, is to make impending death more than just a maudlin rehash of predictable emotions or, on the opposite end of the spectrum, an overly clever portrayal of the brave and feisty corpse-to-be. Although Wade's play doesn't unearth any new perspectives on the brutal finality of death or its effect on family members, it manages to avoid clichés while offering a number of wry chuckles along the way.

Myra is a 60-ish wife and mother in England whose body is beset by bone cancer. Still ambulatory and in possession of all her wits, she is attempting to help her family cope with her imminent demise. This clan includes her two grown daughters, uninhibited and slow-to-mature Jenna and uptight Harriet. Myra's husband, Alec, is a taciturn sort, who uses pointed sarcasm to keep his kin and his emotions at bay.

Played without intermission on Ben Needham's set, which bookends a simple living room with potential burial plots, one almost feels the life being squeezed out of Myra as she pluckily tends her organized death spiral. This includes visits to those possible grave sites and, hilariously, a PowerPoint presentation that Myra puts together called "My Funeral," which outlines certain likes and dislikes. These include bans on an unctuous funeral director or throwing flowers ("that awful thumping sound on the coffin"), but preferences for a biodegradable coffin and maybe some glitter.

As Myra, Anne McEvoy touches all the emotional bases without leaning too heavily on any particularly bleak notes. She gradually tries to build a bridge to scattered Jenna while still finding time to share with Alec. Robert Hawkes is perfect as Alec, his frustration with getting the boiler fixed representing his helplessness in the face of his wife's disease. And he nails the comic lines: When Harriet complains that he's just "sitting there reading" while his wife dies, he responds, "A watched pot never boils."

Heather Lea Anderson Boll skates perilously close to scenery-chewing as Jenna, but manages to keep her character under control. And Liz Conway is marvelously evocative as constrained Harriet.

All in all, director Joel Hammer brings out everything Wade's script has to offer, giving the production a life-affirming power that feels warm and right.