Local Playwright Battles Grief With Glimpse Into The Losses Of War 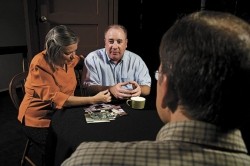 In the last days of July and the first days of August 2005, Ohio was mourning the deaths in Iraq of 22 soldiers from our state. Around the same time, actor and writer Michael Tisdale came home to Cleveland from New York to be with his family after the death of his father. While he and his family made funeral arrangements, attended viewings and services,

newspapers piled up unread. What struck him when he got around to reading the reports was not the mounting death toll, or anything having to do with patriotism or politics, but the simple fact that all of their families had something in common with him: They had lost someone they loved.

The night of his father's funeral service, there was a large memorial at the IX Center for lives lost in Afghanistan or Iraq. Tisdale didn't attend, but he marked the coincidence. The connections were amplified after the funeral, when Tisdale's mother was presented with a folded U.S. flag. His father had served in the Navy in the early '60s, about 10 years before Michael was born.

As he read of Marines killed in attacks with improvised explosive devices and sniper fire, Tisdale felt connections between his family's loss and those of the families whose sons had been killed overseas. But he says it wasn't a conscious decision to write a play about loss.

"I've spent my life in the arts," says the actor, who grew up in Lakewood and studied acting at Juilliard. "It's how I make my living, it's what I do. I don't think it's extraordinary - maybe it was even a requirement that I make a play about this. What else was I going to do? If death was on my mind, I'm going to investigate grief and death. By the time I grasped what I was doing, it was pretty far along."

At first he assumed that his research should consist of reading what other people had written about the subject and looking inward to find his response. The project grew, however, into a play based on interviews with family members of four soldiers who lost their lives the same week as his father.

This week the play - Goldstar, Ohio - will have its world premiere at Cleveland Public Theatre. Andy Paris directs. Tisdale's brother Chuck is one of eight actors in the cast.

"I had read the coverage of The Plain Dealer and for a few months read random articles," says Tisdale. "In October, when my uncle died, I bought a copy of GQ for the flight home, and they had an article about the 325 Battalion. But I wasn't getting a true sense of the people. So I decided if I really was going to write something, I had to try to meet the families." A friend who worked for the PBS news program Frontline told him the best way to get in touch with the families was cold calling. So in December of that year, he began making contact. Then he set aside five weeks in February and March 2006 to visit the families of five soldiers. He began with the question, "Who was the person I don't get to meet because of this?"

Their stories make up the first act of Goldstar, Ohio. Tisdale says he didn't make any amalgamated characters: Every line in the play was spoken by one of the people he interviewed and is delivered by that person's character, lending an autobiographical quality to the piece. Tisdale prefers the word "documentary" over "journalism" to describe the script. An "interviewer" (whose name, Mike, is spoken only once) speaks with each character about the person in their family who has died. Tisdale was careful to preserve emotion by presenting exactly what the real people said.

"They would forget what tense they were using as they talked," he says. "That says to me, on a visceral level, that they wished their loved ones to be alive so badly."

Tisdale gauged what was important to the families by how often they brought something up. When people said something more than once - in come cases, several times - he read that as a sign of its importance, and he would include those words and stories in the script: "I told them when I started that I wasn't creating a structure for my politics. The only politics included would be if someone I interviewed brought it up and repeated the view enough that I could tell it was part of their healing process. Politics does come up, but it is so varied that I don't think the piece leans in any direction. Most of the families aren't interested in the rhetoric of politics."

Instead, it's a play about the universality of grief, and how a common bond with a community can help. "People realize that this person's life will not be lost entirely," says Tisdale. "Their memory will not just fade away."