Saturday, June 28, at the Winchester, Lakewood. 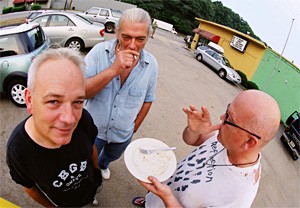 Fans of '80s college rock and liner-note geeks the world over know Don Dixon's name. He's produced Marshall Crenshaw, Matthew Sweet, the Smithereens, and countless other power poppers. Most famously, he co-helmed R.E.M.'s classic debut Murmur with fellow cult figure Mitch Easter. Dixon also makes his own music. On albums like Romeo at Juilliard and Romantic Depressive, the South Carolina native crafts soulful rock tunes that smartly tweak pop conventions. Dixon — who now lives near Canton with his wife, singer-songwriter Marti Jones — has slowly been working his way back to music after a 2001 heart attack. His robust new record, The Nu-Look, blends strong originals (the Stax-y "The Night That Otis Died") and well-suited covers (the dB's "Amplifier"). Dixon says he'll be dipping into his back catalog at this weekend's show. But his revitalizing new album promises to make it more than just a nostalgic flashback to alt-rock's formative days of xeroxed fanzines and flimsy flexidiscs.