MF Grimm attacks the man in the iron mask. 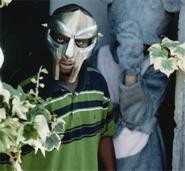 Coming up together as part of New York City's M.I.C. (Monsta Island Czars) crew in the 1990s, Doom was originally known as Zev Love X. But the two went on to share billing on many albums together, as well as the MF nickname, which is sometimes said to mean "Mad Flows" (or in Doom's case, "Metal Face").

The two remained close even as their paths began to diverge. In 1994, Grimm was shot and paralyzed from the waist down; in 2000, he began serving three years on narcotics charges. Upon his release, he started his own record label and has since toiled in relative obscurity.

Doom, meanwhile, had gone on to international acclaim, performing stage shows behind a mask and releasing increasingly popular albums.

All along, beef was broiling, culminating in a new Grimm song, titled "Book of Daniel." The track, produced by St. Louis' DJ Crucial, also features other members of M.I.C. and contains death threats against Doom. Its title references Doom's given name, Daniel Dumile.

The song is from Grimm's upcoming album, American Hunger. It can be heard on a website for Crucial's F5 Records, www.myspace.com/ffiverecords.

Doom was not available for comment, but partner Benn Grimm, reached by phone in New York, says he doesn't believe Doom has heard the song. "As far as I know, we're still all fam," he says of the camp's relationship with MF Grimm. (The Grimms are not related.)

MF Grimm refuses to comment on the song, saying that he prefers to let it speak for itself. "It's just something that had to be done," he says.

Money squabbles have long been rumored between the two MCs, a topic Grimm alludes to in "Book of Daniel." "I made a mistake, told the press you owed dough . . . Money wasn't worth it, and turned us into foes."

The breaking point for MF Grimm, however, appears to have been a lyric from Doom's most recent album, The Mouse and the Mask, a collaboration with DJ Danger Mouse.

"Once joined a rap clique, midgets into crunk," Doom raps on "El Chupa Nibre" -- a derogatory reference to M.I.C. "He did a solo on the oboe, could have sold a million, then the villain went for dolo and cited creative differences."

"[MF] Grimm was pissed at Doom in the first place, and all he needed was these few line disses," says Crucial.

"Book of Daniel" was composed when Crucial visited MF Grimm in New York City last fall, shortly after The Mouse and the Mask dropped. They had already been collaborating for about a year, with MF Grimm's single "Gingerbread Man" scheduled to appear on Crucial's upcoming album, Test Presses and Dub Plates. (Coincidentally, the song's B-side, "My Love," was produced by Doom.) Crucial says that MF Grimm loved the raw, psychedelic beat on "Daniel."

"He's like, 'I got something for this," Crucial recalls. "Two days later, we met back, and he said, 'Crucial, wait until you hear this song.' He just gets in there and starts ripping this verse, and I'm just like 'Oh, my gosh.' I knew how close [he and Doom] had been forever, and now all of a sudden, he's just saying this stuff to everyone. It was wild."

MF Grimm doesn't want people to think the song is a publicity stunt. "There's no way to defend yourself from it, to it being done to profit," he says.

Crucial says that, at its heart, "Book of Daniel" is a plea for reconciliation.

"A lot of people are saying it's a diss song, but it's really just personal. Grimm is just saying to Doom, 'We used to be brothers, what happened? I know your fans love you, but you're getting brainwashed, homey.'"