A German transvestite's closet is stuffed with more than dresses. 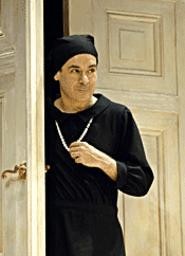 The holy grail of most run-of-the-mill male cross-dressers (as opposed to flamboyantly theatrical drag queens) is the ability to "pass," to be viewed by the world as just another member of the feminine gender. Very often, this requires a substantial amount of cosmetic expertise and behavioral fine-tuning to erase or camouflage inherent masculine characteristics, so that the fellow can be seen as the person he wants to represent. Of course, this raises an important question: If you have to work so hard to be who you are, is that really who you are?

There are some brave souls, however, who don't give a fig for how others view them; they simply go about their business, dressing and behaving as they choose. One such person was Charlotte von Mahlsdorf, née Lothar Berfelde, an open and defiantly nonpassable German transvestite, who managed to live through two of the most repressive regimes in the 20th century: the Nazis' and the Communists'. She wears a simple black shift and black head scarf, a string of pearls, and orthopedic shoes -- clearly and unapologetically presenting as a man in a dress. Her story is laid out in playwright Doug Wright's I Am My Own Wife, now at the Play House. While it is undeniably an engrossing tale, embodied in an awesome tour de force performance by Mark Nelson, the script is strangely empty of any interpersonal emotional connection that could make it resonate long after the curtain falls.

Winner of both the Tony Award and the Pulitzer Prize, the play focuses on Charlotte and more than two dozen other people in her life, including the playwright. In many ways, Charlotte turns out to be a shape-shifter, not the uncomplicated heroine Wright envisioned when he first heard about her. As the episodic script unreels -- composed of interview fragments between Charlotte and the playwright, reminiscences, and brief snatches of scenes from her life -- we learn that some of her stories turn out to be lies, and that she may not be an unsullied transgender pioneer in a hostile land. Specifically, it appears that she was a willing informant for Stasi, the brutal secret police in communist East Berlin.

These revelations lend a fascinating perspective to Charlotte's identity, but the structure of the play never allows the audience to fully engage this complex persona. The short snippets create a jagged mosaic of an individual who, apparently, had few if any close personal relationships. A lifelong collector of furniture, gramophones, records, and other bric-a-brac, some of which came from the homes of Jewish families sent to prison camps, she has in later life turned her home into a museum where the unadorned hostess conducts tours. And those guided forays are about as close as she ever gets to people in this work. Charlotte's obsessive love and care of historical objects gains her some amount of fame and regard in her country, but her fixation on material clutter serves only to distance us from the woman inside.

Within the play, author Wright realizes that he is curating a "museum" named Charlotte and admits, "I don't know what to edit and what to preserve." Indeed, every person is a collection of truths and lies, facts and illusions that we stitch together into an identity, and this play reminds us that we are each in charge of our own narrative. As intellectually intriguing as this conceit is, Wright's editing keeps us at arm's length from Charlotte's inner struggles. Even when she's relating shocking episodes (as a young boy, she killed her abusive father, a Nazi officer) or spending time with a gay fellow collector (who winds up in prison due to Charlotte's snitching), this often morally conflicted person remains frustratingly elusive.

Mark Nelson does a splendid job as Charlotte, speaking in a singsong, heavily accented English that occasionally sounds like a cross between Eva Gabor and Latka on Taxi. Revealing her impish wit with an arched eyebrow or a coy glance, Nelson makes Charlotte an inviting eccentric, even as we learn the less than palatable details of her history -- for example, she ran a bar/hideaway for gays, lesbians, and transgendered folks in her basement, and it's implied that she shared their names with the Stasi for rare perks such as an automobile. Nelson also manages to keep a volley of secondary characters clear, including an American soldier friend who speaks German with a lazy Texas drawl.

Director Anders Cato maintains taut control of the pacing, allowing this quiet show to find its own engrossing rhythm. Although Hugh Landwehr's simple set seems a bit underdone -- tall scrims provide a less than intriguing backdrop for the spare room, in which all the action takes place -- attention is targeted on Nelson's enthralling performance. And that is as it should be, even in a show that could have answered a few more questions than it poses.