Tuesday, October 23, at House of Blues. 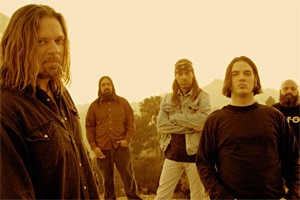 As far as supergroups go, the Louisiana quintet Down is that rare case of the whole exceeding the sum of its parts. Boasting members of southern-metal dirtballs Corrosion of Conformity, Crowbar, and Eyehategod, the band retains a wealth of experience in the art of Sabbath-inspired blues rock. One could be forgiven for thinking that genre has been tapped by a decade's worth of subpar stoner-rock outfits, but Down's new disc, Over the Under, proves that's not quite the case. The tracks "N.O.D." and "Three Suns and One Star," in particular, feature some ridiculously heavy Sab-gone-Dixie riffage.

That said, the main force here is frontman Phil Anselmo, who, like bassist Rex Brown, is best known for his days with Pantera. Like him or hate him — and I was never a big Pantera fan — there's no denying the man's presence or his pipes. He sings, he screams, and on the dramatic eight-minute "Nothing in Return," he even harmonizes a little to nice effect. It is his performance — together with the fact that these are actual songs, not just a bunch of thrown-together riffs — that makes this album such a statement. These grizzled vets have released two other solid albums over their decade-plus of existence, but Over the Under is their best yet.