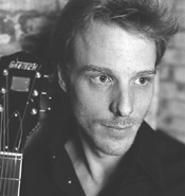 Over the last year, local club owners have brought in some of the finest jazz improvisers playing in New York City's downtown scene, including Tim Berne, Chris Speed, and the Other Quartet. On Wednesday, guitarist Brad Shepik can be added to that list, after he and his quartet play at the Happy Dog Saloon.

In addition to his own group, composed of saxophonist Peter Epstein, drummer Michael Sarin, and bassist Fima Ephrona, Shepik plays with other bands, including Dave Douglas's Tiny Bell Trio, Matt Darriau's Paradox Trio, and the Oscar Noriega Band. Like a number of "downtown" musicians, Shepik is interested in several related genres: He's into not just jazz, but also Balkan and other Eastern European and Middle Eastern genres.

"I don't really feel a spiritual distinction between the different types of music that I play," he says. "I think the underlying joy I feel in music is connected with folk and related musics: music in the vernacular; that implies improvisation. I was always curious about different types of music. I remember hearing a few bouzouki tunes when I was in Seattle and listening to Turkish village music."

Shepik moved from his native Seattle to New York in 1990 and soon was involved with several groups, all of which were influenced by Eastern European music of some kind. He also played in a straight-ahead jazz group, Paul Motian's Electric Bebop Band, for five years. Yet it wasn't until he played with Gypsy saxophonist Yuri Yunakov's Bulgarian Wedding Band in the mid-'90s that he truly adopted an ethnic style of playing.

"With Yuri [Yunakov] we had little common language except music," he recalls. "He taught us the music by ear; he'd encourage me to try different chords and just go for it. The notes had to be right, but that was not as important as putting the right feeling into the music. Sometimes, on stage, he would just growl to get that across."

While chord changes were considered restrictive in the 1960s, Shepik now uses them in a new context. "In the '60s, the avant-garde was about screaming and playing with intensity," he says. "Maybe now the avant-garde is making thought processes as clear as possible."

On the first album Shepik released under his own name (1997's On the Loan), he plays a variety of string instruments, electric and acoustic guitars, banjo, electric saz, and cumbus. It's a testament to the ways in which his work has been inspired by Turkish, Persian, Balkan, and African musical traditions.

"It's mainly the song and the emotion it expresses that interest me," he says. "I'm not so concerned about what it's based on. With [the jazz trio] Babkas, we'd change textures sometimes for variety's sake. It's good to have variety over the course of an evening. I'm trying to make my thoughts more transparent for people to listen to."