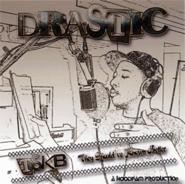 Drastic's They Should've Known Better will further establish the Cleveland rhymer as one of the area's premier MCs. Long known as a battle rapper, Drastic finally puts pen to paper and drops tracks that have had time to brew in his brain. But Drastic isn't running away from freestyle skills; he drops several off-the-cuff tracks, such as "On a Level C Emcee," a hear-me-see-me-love-me head-nodder.

The disc's 25 tracks mix smooth background sounds and beats from local heavyweights: M. Tilla (half of Kickdrums), G.A.B., G.T.G., veteran Sleepy C, and up-and-coming producer Razor Blade. Highlights include the lost-love lament "Thanks I Get It" and "The Art of Storytelling," which focuses on the darker side of relationships over a slow, jazzy loop. Topically, Drastic covers the same material other hip-hop artists can't get past -- "We Right Here" salutes "fly ladies with Halle Berry eyes and wide thighs" -- but as a veteran performer, he understands presentation is what counts.