Script problems scrape Crumbs From the Table of Joy. 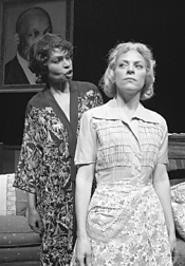 Imagine a play set in the present day, featuring an American woman who is an operative of al-Qaida. Now imagine that this play never addresses any issues raised by her membership in that terrorist group. It would be absolutely nonsensical, given the anxiety and fear engendered by the specter of al-Qaida these days. The rule is simple: You bring up an issue that big, you'd better deal with it.

Crumbs From the Table of Joy, now at the Cleveland Play House, brings up not one but two similarly controversial issues from the early 1950s, but ignores one and trivializes the other. The play's central character, a 17-year-old African American girl named Ernestine, is surrounded by cultural time bombs from the '50s: Her aunt is a Communist Party member (tantamount to being an al-Qaida follower now, in the eyes of the public), and her father marries a white woman. These inflammatory family dynamics are intended to shape Ernestine's struggle as she tries to formulate her own identity. Regrettably, playwright Lynn Nottage botches the job by employing the red-hot social issues more as set decorations than as searing controversies.

The play is structured around studious, movie-loving Ernestine and her younger sister Ermina, who have been brought to Brooklyn, New York, in 1950 to live with their widower father, Godfrey. Soon, his religiously puritanical household is disrupted by the arrival of Godfrey's sister-in-law. Aunt Lily is a vivacious gal with a fondness for cocktails and is an activist in the Communist Party. But she wears her Communist agitation like a dazzlingly unconventional bauble on her Park Avenue clothes (in itself a jarring disconnect, since most 1950s-era black female Communists weren't flitting about in Diors and Balenciagas).

No matter where you come down on the politics, being a Communist in Truman-era America was risky business. At precisely that time, Julius and Ethel Rosenberg were found guilty and subsequently fried in the electric chair for selling atomic secrets to the Russians. Even alleged Commie "symps" were being hounded by Joe McCarthy's congressional thugs, driven into poverty and, in some cases, to suicide. Oddly, none of these realities shows up in the play, even though Ernestine thinks for a time she'd also like to join the Reds.

Playwright Nottage's decision to overlook the whole Communist thing could possibly be forgiven if she had not so badly mishandled interracial marriage. After being tantalized by his luscious and liberated sister-in-law, Godfrey disappears for a few days (leaving his daughters alone with nightclubbing Lily -- unbelievable, given his supposedly rigid morality) and comes back with a German wife, Gerte.

Now, a shocking twist is certainly acceptable in a play, but it should be logical, given the setting and characters. This one isn't, since Godfrey's abiding love for Gerte apparently develops offstage, after a shy encounter on a subway. He simply reenters the apartment with his white wife in tow, to the stunned reactions of his family. Instead of being seen as a deeply felt (if impulsive) personal decision, the marriage comes off as a ridiculously contrived device to create dramatic turmoil.

At this point, Nottage's glibness stretches credibility to the snapping point. In the early '50s, black men were vilified, beaten, and occasionally killed for having intimate relations with white women. Did Godfrey consider any of this in his rush to marriage? We'll never know, although Nottage does a better job showing how the marriage affects Godfrey's daughters and Lily.

Essentially, the playwright slaloms around these enormous cultural issues in an attempt to create a memory play centered on Ernestine and her crucial year in this tumultuous yet loving household. Unfortunately, Ernestine is written as a bit of a cipher: She's too passive and bland. It's difficult to see things from her perspective, since she doesn't really have one. She does have an active, film-fed imagination, though, and there are a few fantasy mini-scenes where characters amusingly behave as Ernestine wants them to. Then we are brought back to reality when she says: "At least that's what I wish would have happened!"

The Play House cast does what it can to save this mishmash. As Lily, Vivian Reed is a spitfire in a scarlet feather boa. She's a black Auntie Mame with a bosom-holstered flask and quick-draw quips. Hyperactive and jittery-legged Ermina is played by Zainab Jah with wiry zest, and Terry Alexander is befuddled as Godfrey, torn between his devout intentions and his worldly desires.

Meg Kelly Schroeder gives Gerte a warm touch, although her German accent is often faint to nonexistent. In the central role of Ernestine, Ayanna Siveris is assigned to wrestle with this squishy, shapeless character. She acquits herself adequately, although her strained intensity when projecting and enunciating is a distraction at times.

There is the seed of a good play within Crumbs, had the playwright dealt honestly with the immense social issues she raises. Then, Ernestine could have been grounded in a realistic family, Aunt Lily could have been more than comic relief, and Godfrey could have found some answers. At least, that's what I wish would have happened.