The Brave Words and Bloody Knuckles fest is a metal fan's best nightmare. 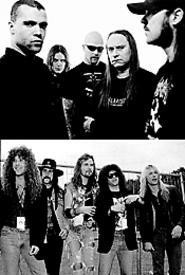 Metal fests in America can be as torturous as the anguished wails of the genre's best belters. Anyone who's suffered through the miserable Milwaukee Metal Fest, with its putrid sound system and ridiculous lack of organization, or the overstuffed New England Hardcore and Metal Festival, which crams 50-plus bands into two days, knows we're short on decent metal events. Compare that to Europe, where well-planned festivals like Wacken, Dynamo, and Bang Your Head emphasize rare performances and unique headliners; crowds numbering upwards of 20,000 are no surprise.

"There's festivals cropping up on every street corner these days in the United States, but it tends to be very, very specific to one genre," says Mark Gromen, senior writer at Toronto-based Brave Words and Bloody Knuckles, one of the world's premier metal mags. "At the same time, the level of the bands seems to be a 'We'll get whatever we can get' kind of thing."

Gromen is combating metal's woes with the inaugural Brave Words and Bloody Knuckles Six Pack Weekend, which kicks off with a local pre-show this Thursday at the Odeon. Where most fests throw together a bunch of big names who frequently make the rounds, the Six Pack Weekend emphasizes exclusive performances: Many of the bands are either playing America for the first time or are returning after extended absences. Several acts, including Nevermore and Dimmu Borgir, are armed with yet-to-be-released new albums, which get their first spins at the fest.

"The reason we held it in Cleveland is that the metal community in Cleveland is one of the strongest -- if not the strongest -- that I know of in the United States," says Gromen, who lived here from 1982 to 1990. "Cleveland has a reputation throughout the country as a great live-music town, and the record companies know that they sell a ton of this kind of music in Cleveland. It just made sense."

Gromen hopes to make the Six Pack Weekend an annual event, and with more lineups like this one, it's almost certain to return. Here's a look at the top international, national, and local bands on tap.

Next to meatballs, vodka, and a buxom bikini team, Sweden is best known for its heavy metal, and the Six Pack Weekend boasts no fewer than four Swede acts.

"Maybe it's because we don't really have too much to do in our youth," chuckles Stefan Weinerhall, guitarist for Falconer, a Swedish power-metal combo making its U.S. debut Saturday. "Maybe it's the climate -- with the dark winter season and everything -- it makes us want to do some kind of hobby." Falconer brings a brand of dramatic metal complete with Tolkien-worthy lyrics, galloping guitars, and occasional Celtic underpinnings.

Candlemass, Six Pack's most anticipated Swedish group, has been absent from the U.S. for 12 years; the band's Saturday show is its only American gig in 2003. Nightfall, Candlemass's 1987 classic, set the standard for snail's-pace, post-Sabbath doom, with frontman Messiah Marcolin's operatic falsetto riding atop wrist-slashing guitars and steamroller rhythms.

Entombed, which plays Friday, is another seminal Swedish act that's returning to town for the first time in ages. The band's Left Hand Path is one of the best death-metal albums ever, with a brutal guitar tone that's like a wasp's buzz fed through a Marshall stack. On last year's Morning Star, the group maintains its trademark menace.

Other anticipated sets include the international debut of Force of Evil, a Danish metal supergroup spearheaded by Mercyful Fate guitarists Michael Denner and Hank Shermann (Friday); Canadian hyperblast kings Kataklysm (Friday); and still more Swedes in the melodic prog-metal dynamo Evergrey, which plans to record a live DVD at its Saturday show.

Thankfully, the Six Pack Weekend boasts more than just dudes named Leif, who say "Ja" when speaking in the affirmative. The lineup of American bands is led by Chicago's Trouble, a storied act that bridges Black Sabbath and the modern stoner-rock movement, with frontman Eric Wagner's manic-depressive howl dueling with towering riffs. Trouble's Saturday Six Pack show is one of only two gigs it will play outside its hometown this year.

Seattle's Nevermore (playing Friday), arguably America's finest power-metal-leaning act, blends classy riffing with glass-shattering vocals. Formed from the ashes of the underrated Sanctuary, it's one of the few bands of its ilk that takes traditional sounds in new directions, incorporating touches of hook-laden modern metal.

Colorado's Jag Panzer also revels in old sounds, and the band plans to play material solely off its 1984 debut, Ample Destruction. Expect an hour of pyrotechnics rooted in the fist-pumping new wave of British heavy metal.

In an impressive display of metal manliness, Boulder frontman Jaime Walters will pull triple duty at Six Pack's Thursday pre-show: singing for his own band, pounding drums with riff rockers Abdullah, and playing bass with the long-running thrash band Destructor.

"It pretty much takes up all my time," Walters says. "I'm in three bands -- and making no money -- but I'm doing what I love, which is the most important thing to me. But it's tough to pay the bills sometimes."

It'll also be tough to miss Boulder's headlining set. The band nearly stole the show at the recent Emissions Fest in Youngstown, with Walters smashing his bass and launching himself at the audience with the remnants, paying little regard to his safety -- or the crowd's.

And Walters's bandhopping isn't the only local attraction: Somnus, which gained a following with its lush, orchestral-sounding dark metal, is re-forming for a one-off gig; progressive metallers Archetype, Parma Euro thrashers Soulless, and a rare set from classic metal vets After Shok round out the pre-show bill.