A legend in Cleveland dining is returned to its original splendor.

The Berea City Club Rib Burn-Off
Cuyahoga County Fairgrounds on Bagley Road in Berea; Friday, May 24, through Monday, May 27; Free 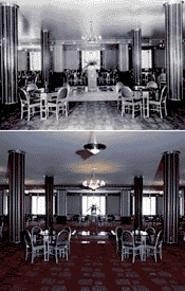 Time has stolen many of Clevelanders' special places, including the Central Market, Mills Restaurant, and Chef Boyardee's. Now, for once, we're getting something back, thanks to Forest City Commercial Development's just-completed restoration of Higbee's Silver Grille. The seven-month, $800,000 project returned the magnificent art-moderne space to its original 1931 splendor.

Rife with marble, grillwork, and intricate plaster moldings, the 8,000-square-foot dining room would be prohibitively expensive to re-create from scratch today, says James H. Richardson, Forest City's VP for development. But fortunately, nearly everything -- chairs, tables, most of the grillwork, and the fabulous red marble fountain in the center of the room -- has remained intact since the restaurant was closed in 1989. Other items, like the dining room ceiling lights and the original carpeting, designed to mimic terra-cotta tile, were painstakingly duplicated from photos and newspaper accounts. Richardson says workers even went so far as to carefully remove seven layers of paint from decorative plasterwork, to uncover the original silver leaf, and checked behind outlet covers to find specks of the original wall paint. The result is a stunning re-creation of the "steamship modern" style (so named after the elegant ocean liners of the 1920s and 1930s) and a true slice of Cleveland history.

In Higbee's heyday, dining at the Silver Grille was the high point of a shopping expedition. Elegant, refined, and cultured, this was where business moguls, wealthy matrons, and their well-mannered children would pause to refresh themselves with dishes like Welsh rarebit, creamed eggs and tomatoes, and chicken à la king. In the early days, a splendid afternoon tea cost 50 cents. Our own childhood favorite, the toasted pecan ice cream ball with fudge sauce, originally went for a paltry 40 cents -- though, of course, that was well before our time.

Thus far, the 350-seat dining room is available only for banquets, with the Ritz-Carlton as the caterer. But the kitchen also contains room for a modern, full-service commercial setup, and Richardson foresees lunch service in the not-too-distant future.

Chef Steve Parris plans to leave the Fulton Bar & Grill at the end of May. During his three-year tenure, Parris developed a reputation for exuberant dishes made with fresh, local produce and naturally raised meats. Parris says he has accepted a position as a private chef and also plans to teach and cultivate his ties with local farmers.