Hopes are dashed and briefly recaptured in V-E Day. 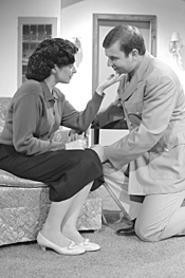 If youth is wasted on the young, idealism certainly isn't. Who, other than those of meager years, could afford to be idealistic in the face of the multiple vicissitudes of life, such as crushed hopes for personal fame, the misery of dead-end relationships, and chronic back spasms? This is why, even as we gaze in admiration at the young and their burnished dreams, we silently rue the likelihood of their spiritual and physical decline to come, and think: "Enjoy it now, kid, while you can still afford -- and qualify for -- health insurance."

Idealism, including its extinction and the rebirth of hope, is the predominant theme of V-E Day, a play by Clevelander Faye Sholiton that is receiving its world premiere at Dobama Theatre. Jumping back and forth in time, from the spring of 2003 to the home front during World War II, we meet a 79-year-old woman named Evie, who is obsessed with ordering floridly huckstered trash from the Home Shopping Network and sarcastically harassing her caretaker-daughter, Aimee. Apparently suffering from Alzheimer's-like symptoms (right after finishing breakfast, she can't remember what she ate), Evie's memory is given a jump-start when an eightysomething man named Bernie shows up at the door with a load of old newsletters that Evie had helped write, along with Bernie's sister Lil, to lift the morale of servicemen from Cleveland's Jewish community.

Through a series of flashbacks, we learn that young Evie had knocked young Bernie off his pins when they first met in 1942. While she talks about her desire to follow in the footsteps of famed female photojournalist Margaret Bourke-White, Bernie's busy trying to impress Evie. So he hides a physical condition that would have deferred him from the military and joins the Army. On holiday leave, Bernie proposes to Evie by slipping an invisible ring (the jewelry stores were closed) on her finger. But she gently fends him off and, once he's gone, slips the phantom ring into a drawer -- she clearly wants to be a globetrotting shutterbug more than a stay-at-home housewife. Meanwhile, Evie is also encouraging Lil (Holly Humes) to pursue her dreams and not get stuck in a boring marriage with her unseen, bland boyfriend.

The interplay between the young and old Evies and Bernies, all four of whom occupy the stage simultaneously at certain points, is intriguing. Adding to the enjoyment, playwright Sholiton crafts both believable and highly amusing dialogue for these characters. On a return visit, old Bernie wants to check Evie's mental state and says, "Tell me my name." To which Evie, enjoying a moment of clarity, responds, "You're in worse shape than I am!" and suggests that he check his wallet for ID. However, the most compelling concept in the play -- Evie's transformation from rosy-cheeked idealist to acerbic old woman -- also reveals Sholiton's major shortcoming. By focusing on the bookend periods of Evie's life, the playwright does not provide the audience the most important information of all: the young woman's reasons, rational or irrational, for giving up her budding photographic career. Her rather sudden transformation into a trapped, possibly alcoholic wife and mother is a shock (as is the fate of young Evie's relationship with Bernie), but the surprise is paid for at the expense of learning more about this fascinating woman. Good as it is, the play could resonate much more deeply if Sholiton had not omitted this element.

Playing the old Evie, Rhoda Rosen is achingly funny as she jerks her daughter around like a Pekingese on a short leash, hiding her emergency call button and squirreling away credit cards for her compulsive HSN purchases. And her scenes with the excellent Mitchell Fields as aging Bernie are sweetly tender. Juliette Regnier's often frazzled but good-natured Aimee will ring true with anyone who has had to tend, cajole, and otherwise manage the life of an increasingly dependent elder. A fresh, Andrews Sisters type, Jennifer Clifford imbues young Evie with the requisite fire of the dreamer. But Michael John Sestili, burdened with the recitation of some rather bland letters from overseas, plays his scenes one note at a time. His climactic hospital confrontation with Evie (which, unaccountably, occurs twice), seems more pouty than profound. Director Jacqi Loewy keeps the pace tight while bringing out the robust humanity of Sholiton's script.

Early in the play, young Evie challenges Lil about her life plans, asking, "What kind of monument are we going to leave?" As it turns out, Evie's monument gets buried in the detritus of daily life. As for playwright Sholiton -- her monument was within her grasp, had she only explored Evie's psyche in more detail. Such is the elusive nature of dreams, whether denied or deferred.