It's not the movie, but White Christmas shovels the holiday hoo-hah. 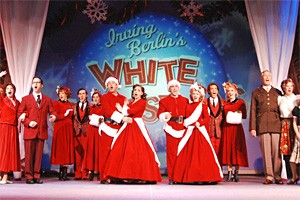 The holiday season is elbowing its way into our lives again. Once more we will be subjected to too much airplay for "Feliz Navidad," too much turducken and tofurkey, and the rest.

Of course, another tradition that will show up on TV is White Christmas, the Bing Crosby and Danny Kaye tribute to showbiz, the military, and the power of ensemble tap numbers. But you can experience this smarm up close, live on the Carousel Dinner Theatre stage.

The theatrical version of this much-loved flick is different from the original. A few more Irving Berlin songs have been added to the familiar ones vocalized by Crosby, Kaye, and Rosemary Clooney.

But the skeleton of the story is still in place: Song 'n' dance dandies Bob Wallace and Phil Davis get tangled up with the trilling Haynes sisters, Betty and Judy. Phil and Judy fall fast for each other, and they conspire to hijack Bob up to the snows of Vermont, where the gals are booked. Needless to say, much singing and dancing ensues.

The Carousel production, under the direction of Stephen Bourneuf, makes excellent use of an ample stage, smoothly establishing several different locales, including a World War II battlefield (where Bob and Phil meet), New York nightclubs, and the Pine Tree Inn, owned, to the boys' surprise, by their former commanding officer, General Henry Waverly (a properly ramrod-stiff Bob Stoeckle).

As the key male leads, Richard Roland and Josh Walden don't have the chemistry of Crosby and Kaye, but they certainly have their moments. Roland has a strong, pleasing singing voice, and he manages to play the straight man to Walden's compulsively comical Phil. While Walden pumps plenty of energy, he's not a natural clown and doesn't take as many goofy chances as he might, especially when he and Bob reprise "Sisters" in halfhearted drag.

Susan Derry pouts prettily as Betty and acquits her singing chores well. So does Ellen Zolezzi in the role of Judy. But this script doesn't allow either gal to create a character that can stand up to the guys, so they tend to recede into the background.

Much of the humor and snap in this production is provided by Michele Burdette Elmore, who plays Martha, the General's housekeeper and all-around noodge. Whether she's baiting the old man ("We're like an old married couple: We fight all the time and never have sex.") or hassling callers on the switchboard, Elmore turns Martha into an almost constant delight. And even though she doesn't quite have the diaphragm to turn her solo, "Let Me Sing and I'm Happy," into a showstopper, she has fun with the material.

However, some of the new twists to the original don't quite work. The addition of the General's young granddaughter Susan (Ashley Barstow) seems a bit forced, with her reprise of Martha's song not good enough to be showy, or funny enough to be good. And some of the added songs, such as the Act Two opener "I Love a Piano," come out of nowhere and go no place.

But the biggest disappointment is that the title song is presented as a sing-along with the audience and not as the island of reverie it is in the movie. Perhaps one of the best pop tunes ever written, "White Christmas" deserves to be performed with tender care by someone who can really croon — not doled out to people sitting next to you, who are still picking roast pork out of their molars.

Even so, this White Christmas has its heart in the right place, and you could do a lot worse than spend an evening in the company of Irving Berlin classics such as "Snow" and "How Deep Is the Ocean?"