Despite its drinker-friendly persona, the Lava Lounge serves some really good food 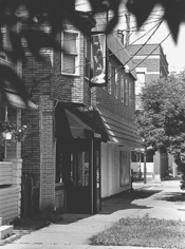 The bartender was notably patient. "No, we don't take reservations," he told the caller. "We don't serve dinner. This is a bar, you know, not a restaurant."

Methinks the fellow seriously underestimates the grub that comes out of the Lava Lounge's tiny kitchen. Admittedly, feeding the hungry masses is not the sole raison d'être for this cool and comfy joint, which stays open late into the night on the gritty edge of Tremont. With its five tables, four lava lamps, three red-lit ceiling fixtures, two 1950s-style sectional sofas, and one central pillar, gussied up with Picasso-esque nudes, the lounge is more about drinking, talking, drinking, watching TV, drinking, hanging out, and drinking than it is about food, at least up until the wee morning hours, when the uprooted patrons and staff of other area establishments stumble out onto the street in search of a bite to eat.

But despite the lounge's drinker-friendly persona, the kitchen's multicultural "tapas menu" includes some really good food. This is no surprise, since the Lava Lounge, which opened late last year, is the joint project of Ricardo Sandoval (partner in nearby Fat Cats, Hudson's Red Tomato, and D'Agnese in Seven Hills) and Jack Arfang. The owners also double as kitchen staff and, along with cook Jeremy Yurcik, clearly know their way around plates, small or large -- whipping out remarkably precise versions of such unassuming standards as omelets, deep-fried calamari, and stuffed mozzarella.

In the not-too-distant future, Sandoval and Arfang intend to increase the lounge's emphasis on dining, with an enlarged menu and eventual expansion into a second-floor space. And before summer's end, expect to find the spot open for weekday lunches. Still, with a little ingenuity, it is currently possible for hungry guests to piece together a satisfying three-course meal -- appetizer, salad, and main event -- from among the dozen or so offerings on the hand-printed menu. If you are in no hurry, so much the better. Drink a little (perhaps something from the sophisticated and reasonably priced wine list, or one of several draft or bottled beers, or nearly any mixed drink imaginable), eat a little, and repeat until satisfied, all under the near-hypnotic influence of trippy electronica and the devilish glow of crimson Christmas lights.

There's no better spot to start the process of culinary exploration than with the lounge's top-notch breaded calamari: thickly sliced rings and wispy tentacles as crunchy, buttery, and well-seasoned as any we've found around town. With a sweet pineapple salsa on the side, this big-flavored, meltingly rich dish could make a fan out of even the most squeamish squid-eater. Two big rectangles of crisply breaded and fried mozzarella, stuffed with strands of salty prosciutto ham and bits of fresh basil, were also excellent; they were served on a bed of creamy marinara that was so rich and well-rounded that we finished it off with a spoon.

Despite the lounge's sort of collegiate, flea-market chic decor -- red- and cobalt-painted walls, a worn wooden floor, and a more or less tacky faux-wood bar top -- those who eat are treated to big, thick cloth napkins and food that is simply but attractively arranged on sturdy white stoneware. On two relatively early visits -- out by 9 p.m. on one trip and out by 10 p.m. on the second -- service was provided by our friendly and accommodating bartender, who not only mixed our drinks, but took our food orders, cleared our plates, and even brewed us a pot of coffee. Later in the night, when the crowd gets heavier, we are told that extra staffers come on board to help carry the load. (Besides the 30 or so patrons who can comfortably sit inside the lounge, a miniature patio in the back provides seats for about a dozen fresh-air fans.)

We were impressed to spot vegetable-and-potato Samosas on the menu, served with a toss of pickled onions and a cup of cool, thick raita-like cucumber-yogurt dressing on the side, although the deep-fried, Indian-style turnovers turned out to be pretty bland. Likewise, four large, butterflied Tempura Shrimp came coated in a pleasingly light batter and sided by a spoonful of deep-green seaweed salad. But while the shrimp had a nice flavor, their too-dry texture was a drawback. On our next visit, we will also skip the odd guacamole: a surprisingly dull combination of whipped avocado, pineapple, and jalapeno pepper, accompanied by a pile of colorful, crisp tortilla chips; however, two companions who say they generally don't cotton to the traditional avocado-cilantro-and-salt combo swear by the Lava Lounge version, so the dip is obviously not without its fans.

Among other picks, the current menu's single salad offering -- a mound of silken, peppery arugula in a bright cucumber vinaigrette, set off with several sugary-sweet grape tomatoes -- was a fresh and assertively flavored winner.

Also tasty was a plump wedge of very good focaccia wrapped around a first-rate Ribeye Sandwich, loaded with roasted yellow pepper, caramelized onion, and pungent Gorgonzola. A generous tangle of thinly cut, floured fries (pommes frites, the menu calls them) with a scoop of thick homemade mayo was just the right touch on the side.

Thin slices of Cold Marinated Pork Tenderloin, arranged around more of that spicy arugula, also made a delicious light entrée. The gently roasted meat was rich and moist, with well-developed flavor and a satiny texture. And we couldn't get enough of the kitchen's peppery Cavatelli tossed with Reggiano Parmigiano cheese, brown butter, and lots of pepper-crusted bacon -- although it wouldn't have hurt to have reduced the pasta's cooking time by a minute or two.

But if we ever decide to go hunting for the Perfect Omelet, I don't think we'll have to go much further than the Lava Lounge to find it. Plump and delicate, with the cloudlike quality of a soufflé but the soulful depth of honest fried eggs, the omelet was flecked with crumbs of spicy chorizo sausage and topped with a triple-header of sour cream, tomato salsa, and that sweet pineapple guacamole (which, incidentally, tasted much better with the eggs than it did on its own with tortilla chips). Hearty and delicious from end to end, the dish was completed with a large, warm, crostini smeared with tangy goat cheese.

Despite their remarkably upscale take on bar food, I guess the good folks at the Lava Lounge had to draw the line somewhere, and that seems to have been at serving desserts. Instead, we put our sweet tooth to rest with a generous pour of Napa Valley Muscato (St. Supery, $6), a juicy late-harvest white bursting with the flavor and aroma of sweet green grapes.

Anyway, by that time, we had checked out the ever-changing flow of patrons (from a middle-aged couple nursing scotch-and-sodas to fresh young faces grabbing a quick bite before a party to a group of battle-fatigued teachers excoriating their co-workers over beers and chicken wings) and observed in only mild surprise as a middle-aged man stretched out on the pavement outside the window ("You know you've found us when you spot the guy sleeping in the middle of the road," the bartender observed wryly). It wouldn't be closing time at the Lava Lounge for several more hours, but for us it was clearly time to wander off into the night. Being very careful, of course, not to run over anyone caught napping on the yellow line.