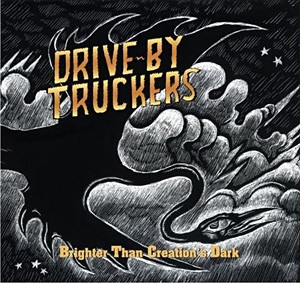 Fresh off a gig as soul-siren Bettye LaVette's backing band last year, kick-ass southern rockers the Drive-By Truckers went into the studio with veteran keyboardist Spooner Oldham. The result is one of their best albums, Brighter Than Creation's Dark, which gains a degree of gravitas from Oldham's subtle but enormous presence. He adds texture and color throughout the 19 impeccably crafted tunes, instilling them with a timelessness that's been his calling card since the '60s (he's played with everyone from Bob Dylan to Aretha Franklin).

It helps that singer-songwriter-guitarists Patterson Hood and Mike Cooley both check in with songs that rank among their finest. Even bassist Shonna Tucker — stepping in for her singing-songwriting ex-husband, Jason Isbell, who left the band in 2007 to pursue a solo career — contributes a couple of decent tracks, including a terrific aching country ballad, "I'm Sorry Huston." But it's the band's two frontmen who really make Brighter shine — particularly Hood's contemplative "Two Daughters and a Beautiful Wife" and Cooley's wistful bluegrass tune, "Perfect Timing." Like last year's relatively placid tour sets, Brighter Than Creation's Dark shows a quieter, more cautious Truckers at play. They still rock like a distilled Skynyrd when they need to, but their hard-earned wisdom burrows deep into the most poignant album of their dozen-year career.