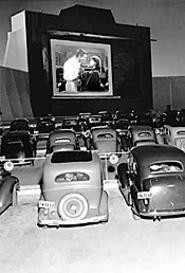 There were two golden ages of drive-in theaters: the '40s and '50s, when suburban families watched dancing hot dogs extol the virtues of the concession stand; and the '60s and '70s, when teenagers tried to score as horror flicks unspooled before them.

But for Bill Jelen, who grew up in the east Ohio town of Salem, even the '80s were golden. "When I was 16, the drive-in was the thing to do," explains the 37-year-old father, whose website, Bill Jelen's Drive-In Theatre Page, details Northeast Ohio's rich drive-in history.

Jelen's passion led him to explore the region's outdoor theaters, snapping photos as he went. His young children helped fuel the obsession -- after some initial reluctance. "The first time we went, they [said], 'We're going to watch movies in the car? No way!'"

To Jelen, each of the area's drive-ins has its merits. "The Memphis is the only triple-screen drive-in in Ohio," he says. "And because it's owned by the same guy who owns the Memphis Kiddie Park across the street, [its] playground has some of the most phenomenal old-style equipment that you'll ever find."

If it's between-movie treats you're interested in, Jelen suggests North Ridgeville's Aut-O-Rama. "I think they have the best concession food of anyone in Northeast Ohio. They have a great meatball sub."

Jelen spends most of his time at Ravenna's Midway Twin, which features a display case of drive-in artifacts (speakers, a portable heater). But it's not just nostalgia that's filling the lots, according to Midway Manager Pat Marxin. Drive-ins have come full circle, he says, with families once again making regular trips: "There's a huge number of minivans out there."

Not surprisingly, showing quality films helps business. "If you don't have first-run movies, people won't come," Marxin sighs. "Maybe when these kids become teenagers, we can finally see a sequel to I Eat Your Flesh."