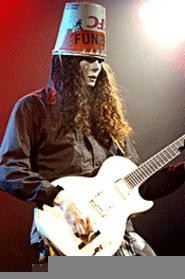 Cleveland's hottest hip-hop production team just went national, providing a beat for one of the biggest rappers in the game. Collectively known as the Kickdrums, Alex Fitts (formerly Fitty) and Matt "Tilla" Pentilla (formerly MTilla) are featured on Interscope's just-released Get Rich or Die Tryin' soundtrack, providing a beat for multiplatinum rap star 50 Cent and M.O.P. in the song "When Death Becomes You."

"50 [Cent] heard that track, and he went nuts," says Shalik Berry, an Island Def Jam/Roc-A-Fella senior A&R representative, who is co-managing the duo. "They're probably going to be the hottest producers around within two years. Their sound is unique: crisp, clear -- it's grimy, it's hard."

In addition to landing a track on what is likely to be one of the year's top hip-hop albums, the two are working with former Clevelander Ray Cash on an album due in early 2006 on Sony, and they provided the beat for his latest 12-inch single, "Smokin' and Leanin'." The two also have lined up tentative tracks for the upcoming Island Def Jam/Roc-A-Fella release from Philly rapper Freeway. Fitts says the team just sold five cuts to Houston rhymer Slim Thug. Although they have a direct pipeline to the ears of some of the biggest names in the business, Fitts and Pentilla plan to remain in Cleveland.

"The idea is to keep the ball rolling," says Fitts. "We have a lot of things out there that will send us over the top."

Fitts says he plans to continue as a member of Spittin Image. The group is now being managed by Chimaira bassist Jim LaMarca.

· Peabody's has new principal owners. Dan Cull and Josh Kabat will remain minority owners, but have sold a controlling interest in the downtown rock club to Derek Sutcliffe (bassist in American Rockstar) and Chris Zitterbart. Cull says that he'll remain involved in running the club and that the business will remain essentially the same, from the acts it books to the club's staff. "[Sutcliffe and Zitterbart] will take good care of the scene," says Cull.

· The Cleveland Bop Stop (2920 Detroit Avenue) is back. Grammy-winning tenor saxophonist Joe Lovano will play a two-night stand on Friday and Saturday, November 11 and 12.

· Citing business concerns, Cleveland hard-rock combo Rikets has splintered. Frontman Scott Rose (ex-Erase the Grey) has taken on most of Columbus' Sighlo as a backing band, following the resignation of his entire group. The former Rikets players will continue as Tinjen; they have already inked a deal with Rikets' label, Corporate Punishment.

· Lakewood's Strangelove Studios and Ystop Records will record an acoustic open-mic night on Saturday, November 12, at the University Circle Arabica Coffeehouse (11300 Juniper Road). The session is free and open to all performers.