A drunken rant propels a band of local comics to multimedia stardom. 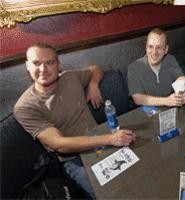 It was a sight he'd seen plenty of times: A cluster of gel-haired twentysomethings, guzzling Jäger Bombs and grinding their designer jeans against any female they could find.

But on this March night last year, after a regrettable amount of drinking on West Sixth, Mike Polk decided he'd seen enough.

Polk, 28, is best known as the lanky comic who does the promotional spots on Channel 19. But his body of work goes beyond filling the space between segments of King of Queens. He produced a Saturday Night Live-inspired sketch revue at Kent State, which he later spun off into a stage show. And though he performs only sporadically, he's among Cleveland's funniest stand-up comedians.

On this night, Polk went home and penned a caustic first-person essay, written from the perspective of a Red Bull-fueled asshole. He titled it "Look at My Striped Shirt!"

"I will talk to people I don't know about my job tonight!" Polk wrote. "They will all know that I am an important man! I will call female bartenders 'Babe' and male bartenders 'Chief'! When I do not hook up with a girl at that club, I will say that the place is 'full of skanks!'"

Then he pressed send.

He e-mailed the essay to a humor website his friend had recently launched. Charlie DeMarco, a perpetually bored smartass, had dropped out of Kent State and moved to L.A., but he missed cracking jokes with his friends. So he started thephatphree.com, hoping to create an outlet for his brand of humor: a testosterone-laced stew of The Onion, SNL, and ESPN.com.

The site went live in February 2005 with a series of off-the-wall essays. "The NBA All-Ugly Team" offered a breakdown of the most hideous mugs in pro basketball. Another essay mocked the Lance Armstrong-inspired "fad" of hating cancer.

A month later, "Look at My Striped Shirt!" hit the web. It quickly struck online gold.

Someone forwarded it to a friend, and suddenly Drunk Mike's rant was popping up in in-boxes everywhere. Within a few months, the site was attracting 20,000 hits a month.

Visitors discovered the other essays as well. The All-Ugly Team was the talk of ESPN Radio and The Best Damn Sports Show Period.

The press fueled traffic and spread the striped-shirt virus even more. By summer, DeMarco was fielding calls from talent agents and being courted by the publishing industry.

Leavell was looking for additions to his stable of young, crass, brutally honest male writers -- potential contributors to an emerging literary genre that's been dubbed "fratire." He perused the site, phoned DeMarco, and determined that he and his friends were worth a contract. "The guy's just a fucking professional," the agent says of DeMarco.

Leavell offered to represent the guys of the Phat Phree, who in turn banged out a proposal for a collection of first-person essays similar to "Striped Shirt!", with titles including "This Gang Bang Is So Awkward," "I Will Get Off This Plane Before You," and "I Am So Naked in This Locker Room."

Random House snapped up the rights, cutting the Phat Phree a check for $35,000. The book, "Look at My Striped Shirt: Confessions of the People You Love to Hate," hits stores in December.

On a recent Thursday night, Polk sat in a striped-shirtless pub in Lakewood. Wearing loose jeans and a T-shirt, he marveled at the opportunity getting wasted has afforded him.

Sitting next to Polk were two other Phat Phree contributors: Mike Martone, a 34-year-old med student, and Mike Hagesfeld, a 31-year-old computer programmer. With the success of the Phat Phree, all three Mikes -- and plenty of their friends from the Cleveland comedy scene -- are getting bi-coastal attention.

The Phat Phree's website continues to expand, every day posting new essays, fake news stories, and, DeMarco says, anything that falls into the category of "shit we think is funny."

And doors continue to fly open. Last fall, they sold a sitcom to Fox Studios. The show -- about average Midwest guys trying to make it big, naturally -- wasn't picked up, but Katalyst, the studio owned by Punk'd creator Ashton Kutcher, agreed to produce it and is in talks about a slot on MTV.

The Phat Phree also has opened an online store, Shitleys.com, that sells T-shirts inspired by the site. They've jumped on the viral-video bandwagon, producing a series of fake-movie trailers with titles like "The Ho-lympics." And they've even talked to cell-phone providers about creating video content for phones.

"You feel like a fraud sometimes, getting calls from these people who don't know that I haven't really accomplished anything in life," Polk says.

But he also recognizes that he and his friends suddenly have a much larger audience. He's just glad he didn't screw it up with sobriety.